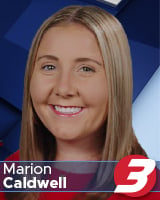 Marion Caldwell joined WWAY in May of 2022 as a Weekend Meteorologist and multimedia
journalist.

Marion grew up in a small town in Georgia on her family’s farm where weather played a
significant role, which is where her interest in forecasting began.

Marion received her degree in Meteorology from Mississippi State University. While there,
Marion served as a forecaster and producer for MSU Weather. Throughout her 4 years in
Mississippi, she experienced and forecasted weather anywhere from tornadoes, extreme heat,
and even snow.  Also, during her time in college, Marion worked as a Freelance Meteorologist
in Columbus, GA.

As a reporter at WWAY, Marion has covered everything from storm damage, community
events, and even Friday night football.

Outside of the studio, Marion enjoys running, playing tennis, and reading a book on the beach.
Marion is excited to be starting her career at WWAY, taking on the challenges that come with
forecasts on the coast, and getting to know the community through reporting.

Local archaeologists dig for more of Wilmington’s past

Doctors with Novant Health give update on COVID, Flu, and RSV