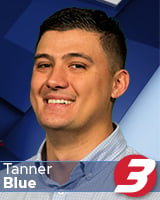 Tanner Blue joined WWAY in November of 2022. He is currently a multimedia journalist and appears on our sports segments at times.

Tanner graduated from the University of North Carolina at Charlotte in 2019. During his time there, he majored in communications, minored in journalism and was a part of the student media team. While at the university, he hosted radio programs, color commentated colligate basketball games and helped manage the radio station.

Tanner is a Wilmington native and spent most his childhood growing up in Leland as well. He’s spent significant time in multiple areas in the community. Tanner also has roots in Robeson County and is Lumbee Indian.

Tanner is a diehard Carolina Panthers and UNC Tar Heels fan. His hobbies include watching sports, playing golf, going to the gym and spending time with his family. He is recently engaged to his fiancé Olivia and enjoys the company of his two cats, Milo and Willow.  Tanner loves watching scary and superhero movies. His favorite superhero character is Batman and his favorite horror film is John Carpenter’s original Halloween from 1978.

7th year anniversary of the disappearance of Ebonee Spears

WPD will step up patrol on New Year’s Eve

Win your own restaurant with “Own Your Own” contest

Salvation Army in need of clothing due to winter weather

Shoppers return the day after Christmas to return gifts

Local seafood store has oysters despite in climate weather

Preparing your car for the winter weather

ILM expecting to be busy the week of Christmas

North Carolina begins Booze It and Lose It again today