WRIGHTSVILLE BEACH, NC (WWAY) — Boaters heading offshore in the cooler months may soon have to slow down, according to a proposed speed limit change from the National Oceanic and Atmospheric Administration.

NOAA is proposing vessels larger than 35 feet long travel at a speed no faster than 10 knots +/- 60 miles from shore for five months out of the year. In North Carolina, that would be from November 1 to April 30. 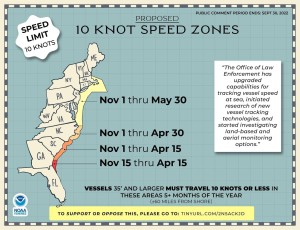 This change is being proposed as an effort to protect endangered right whales. It would impact people like Wrightsville Beach Diving Charter Captain Chris Slog, whose boat is 36 feet long.

“We typically cruise 20 to 22 knots and we’re going 30 to 40 miles offshore. Typically we leave at 7 am and get back around 3:30-4 in the afternoon,” Slog said. “Restricting our speed to 10 knots will double our travel time. We’re basically at eight hours of travel time in a day to run a charter, which unfortunately is not feasible to do in a day. Especially in the months of November to April when we don’t have as much daylight.”

After spending several years on the water, the Wrightsville Beach Diving crew has never seen a right whale. Even if they had, Captain Brett Garner says other boats could cause damage as well.

“The smaller center consoles that are in the 30-32ft range that go at high speeds and travel pretty quickly,” Garner said. “They can cause just as much damage as our boat can.”

From 2017 to 2022, NOAA recorded an unusual mortality event for right whales. It reports that 34 whales died along the coast of the United States and Canada, three deaths were caused by vessel strikes in the United States, and none in North Carolina.

“Just based on the number of whale strikes that have happened, of course, nobody wants that, none of us want that,” Slog said. “But to have it really affect so many people, I mean this isn’t just North Carolina, it’s the entire East Coast pretty much. I mean, we wouldn’t be able to run charters in those months. Just because of the time.”

The public comment for the proposed change is open until Friday. So far, NOAA has received more than 3,600 comments on the rule. To share your thoughts, visit here.