ACC commissioner says CFP expansion should be put on hold 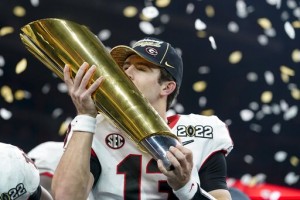 ACC commissioner says CFP expansion should be put on hold

US (AP) — Atlantic Coast Conference Commissioner Jim Phillips says now is not the time for College Football Playoff expansion, citing an abundance of uncertainty throughout college sports and the NCAA.

“To the ACC, we don’t have a College Football Playoff problem,” Phillips said Friday during a conference call with reporters. “We have a college football and collegiate athletics-slash-NCAA problem.”

Phillips said with the NCAA about to embark on a transformation of Division I, CFP expansion should not be a priority.

Phillips also cited the continuing need for federal legislation regarding name, image and likeness compensation for athletes, the lingering ramifications of last year’s Supreme Court ruling that struck down the NCAA’s limits on athletes’ educational benefits, and the possibility of athletes organizing.

“The membership of the ACC is very much aligned in its position that now is not the time to expand the College Football Playoff,” Phillips said, taking the strongest public stance against early expansion of any of the conference commissioners who have been involved in the process.

The 10 conference commissioners who make up the CFP management committee, along with Notre Dame’s athletic director, wrapped up three days of meetings last weekend before the national title game in Indianapolis with expansion talks still stalled and hopes for implementation of a new format by 2024 dimming.

But the door was not fully closed on early expansion.

A 12-team playoff proposal has been on the table since June.

Phillips said the ACC favored expansion only to eight teams but by November had determined there was too much else going on in college sports to rush to expand college football’s postseason.

The 12-year agreement for the current playoff runs though the 2025 season. Phillips said the ACC is not against expanding the format eventually, just not now.

There is no agreement in place beyond 2025.

“Membership believes that we have a responsibility in looking at the CFP and college football from a holistic perspective and not just whether to add more teams to the playoffs. There are legitimate concerns about student-athlete welfare, the impact on academics and the length of the season,” Phillips said.

Phillips said before the CFP expands, a full review of how major college football operates — from the recruiting calendar to transfer rules to how spring and preseason practices are scheduled and run — should be done.

Follow Ralph D. Russo at https://twitter.com/ralphDrussoAP and listen at http://www.appodcasts.com

North Carolina manufacturer to close, puts 475 out of work

Timeline of events since George Floyd's arrest and murder