WILMINGTON, NC (WWAY) — Celebrities and influential alumni in Wilmington have now gotten on board in condemning a controversial UNCW professor, and are demanding he be fired from the university.

The time for that to be tolerated on the campus of UNC Wilmington is over,” UNCW Alumnus and Former Board of Trustees member Gary Shipman said.

Shipman is one of a growing group of people who are putting a foot down, as the movement against UNCW Criminology Professor Mike Adams gains momentum.

One celebrity who now lives in Wilmington with his family has gotten on board, saying he was surprised to find out how long the concerns over Adams have existed.

Adams has previously won lawsuits against the university based on First Amendment rights.

Shipman calls himself a staunch advocate for academic freedom, and say he supports the right to free speech, but thinks Adams has gone too far.

“It is my belief that Professor Adams has crossed the line and that accordingly, nothing, or much of what he has done is protected under the First Amendment at all,” Shipman said.

As a donor to UNCW, Shipman has decided to pull his financial contribution to the university until Adams is no longer employed there.

“He’s had an opportunity to walk back some of his conduct and some of his words, and so yes, given that he can’t do that and has shown he’s incapable of doing that, then yes, I’m calling upon the university to take disciplinary action against him, including his termination,” Shipman said.

Jones is right there with Shipman, and says he encourages people to speak out, write letters and to even withhold funding until something is done.

“So the question is not just, ‘How do we get rid of Mike Adams?’ The real question is, ‘Who has been protecting Mike Adams all this time?'” Jones said. Who has allowed this to continue? Who looked in the face of those students and said, ‘You should accept and expect the fact that you’re being harassed.'”

Even One Tree Hill stars took to Twitter to express their own outrage about Adams’ statements, demanding for him to be fired. 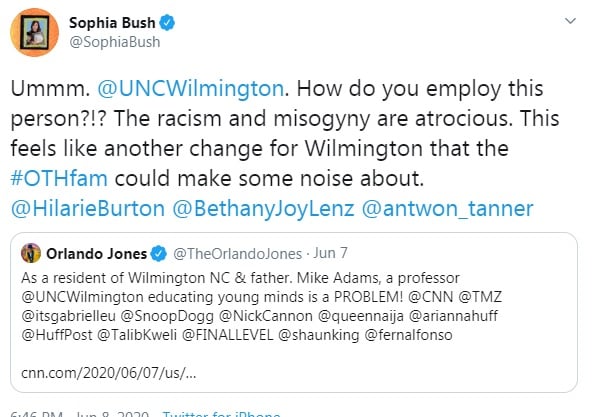 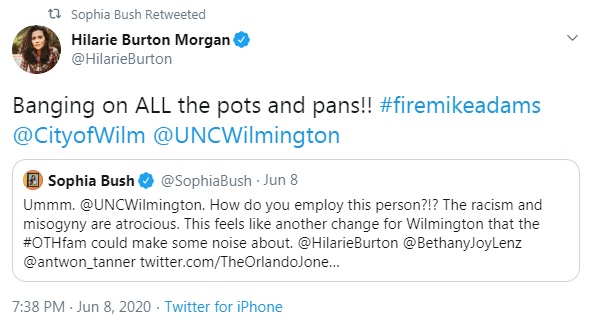 “So UNC Wilmington is 100% complicit,” Jones said. “100 complicit here. They know and have been protecting him.”

The university says it has no further comment on the matter at this time.

WWAY reached out to Adams several times, but has not heard back.