CAROLINA BEACH, NC (WWAY) — Trouble in paradise? Some Pleasure Island residents are not happy about the possibility of a floating home being docked in a marina right in front of their homes.

Oceana Owners Association President Olin Furr says the house on a barge is hoping to dock right in front of a waterfront home in the neighborhood.

“On their second floor balcony the only thing they would see is the back side of the roof system,” Furr said. “So the value of that home is going to plummet a lot and it’s really not fair to the homeowner.”

Late last week, Oceana residents created a blockade of boats to stop the house from being towed into the marina. 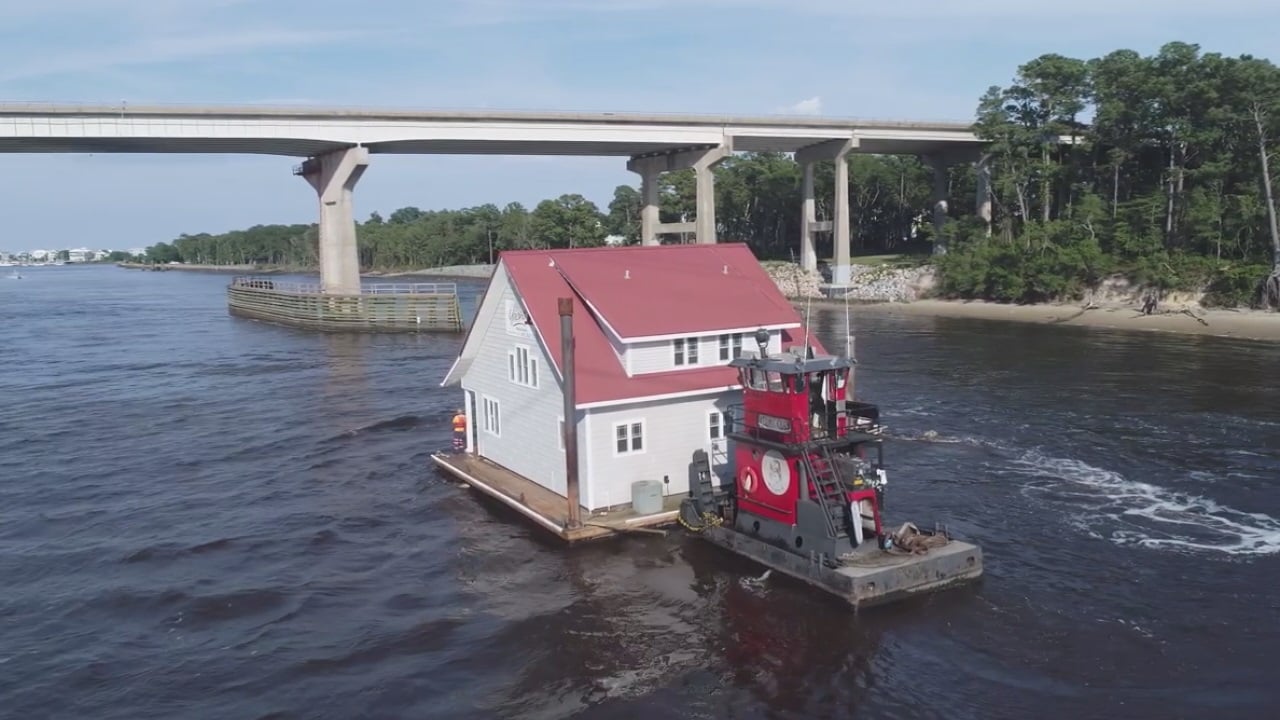 Floating house being towed down the Snow’s Cut on June 26, 2020. (Photo: Christopher Scharf)

It is now tied to a fuel dock, which residents say violates state fire code.

Residents cite the Town of Carolina Beach’s harbor regulations, saying the floating home is not allowed to dock in public trust waters because it is not considered an actual boat.

According to Carolina Beach Code of Ordinances Chapter 10 Section 3 boats are defined as, “watercraft of any type or size specifically designed to be self-propelled, whether by engine, sail, oar, paddle, or other means, which is used to travel from place to place by water.”

In the same section, floating homes are defined as, “a house built on a floating platform without a means of propulsion.”

Furr says the floating home cannot be driven, it must be towed.

“This is a floating barge that has a stick built house sitting on top of it. It has no motor, it has no steering, it has no rudder. It has to be pulled around by a barge, it’s not self-sufficient. That’s where the issues come in with the ordinance,” Furr said. “In chapter 10, it says ‘The town shall continue to prohibit the occupation of public trust waters by floating homes.’ So we checked, these waters out here are public trust waters so it’s very plain in their ordinance what it says.”

Homeowners say they have worked hard to invest into the waterfront properties and they would like to see the town uphold their regulations.

“It’s not our opinion, we’re looking straight at what’s written in their ordinance,” Furr said. “I’m looking out here at what’s sitting on the dock, and they match up perfect. So, for me, the decision to make that house boat leave the marina would be very easy and very quick.”

The town says code officers will inspect the floating house Monday and they expect to make a decision on whether it can stay at that time.

The owner of the home directed us to his attorney who said they do not have a comment at this time.