BRUNSWICK COUNTY, NC (WWAY) — Brunswick Community College held a ceremony on Wednesday before the men’s basketball opening game to celebrate the naming of the court as the Walter Shaw Court.

In a release by the college, Coach Shaw recently led the men’s basketball team to his 408th win as head coach. Shaw has served the Brunswick Community College Men’s Basketball Program for 26 seasons with 22 seasons as head coach. Under his leadership, the team has received five NJCAA Region 10 Division One Regular Season titles, three NJCAA Region 10 Tournament Championships and two NJCAA Atlantic District Championships. Coach Walter Shaw led the Brunswick Community College Men’s Basketball team to the NJCAA Division One National Tournament in 2010 and 2021. Shaw has been named Region 10 Men’s Basketball Coach of the Year four times and Atlantic District Coach of the Year in 2010 and 2021. 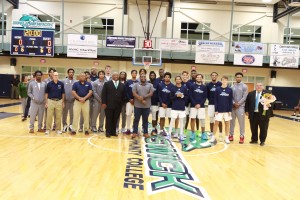 “We are proud of Coach Shaw’s accomplishments on the court but, more importantly, the opportunity he provides to our student-athletes to further their education through basketball,” Brunswick Community College President Dr. Gene Smith said. “His ability to mentor and help our student-athletes meet their potential is remarkable. His results speak for themselves as many of his players have moved on to become leaders in society.”

A native of Riegelwood, Shaw was chosen as the BCC head coach in 2000 at 23 years old. He began his coaching career at BCC as an assistant under the founding coach of the BCC program, the late Gene Doane. Before being named to the BCC coaching staff, Shaw worked as a student manager for Coach Jerry Wainwright and UNC-Wilmington.

He has served in many capacities on the BCC campus throughout his tenure. Currently, in addition to coaching basketball, Shaw serves as the Director of the Health and Fitness Science Program. He also serves as the Director of the BCC Holiday Basketball Classic and has served as the Brunswick County High School Christmas Tournament director. He has also served on the parent advisory committees at both Supply Elementary School and Shallotte Middle School in recent years.

In his time at BCC, 142 players have matriculated to four-year colleges or universities, with 62 being a part of NCAA Division One teams. His players have signed to 78 different colleges in 19 states. Eight of those players have helped their teams to the NCAA tournament, and eleven have moved to the professional ranks in the US and abroad after completing their college careers.

“For Coach Shaw, student/athlete success in the classroom and community is more important than success on the basketball court,” BCC wrote in the release. “This philosophy has allowed him to have a 97% matriculation rate of his sophomore players to four-year schools. Shaw’s players have also taken part in lunch-buddy, reading/tutoring programs, and basketball clinics at local elementary schools throughout the years. The Dolphins were chosen as one of the 50 best two-year programs in the country since 2000 by Basketball Times Magazine in August 2009 and one of the most unheralded Division One junior college programs in the country in November 2009.”