The Christmas movie is premiering on Nickelodeon network on Nov. 26 at 7 p.m.

WILMINGTON, NC (WWAY) — A young woman who grew up in the Cape Fear is starring in a new movie premiering soon.

Lexi DiBenedetto, a 22-year-old Carolina Beach native, landed a role as Lori Loud in “A Loud House Christmas,” a live-action take on the popular Nickelodeon show “The Loud House.”

This is not her first role in front of the camera. Before her movie role, she starred in “Knight Squad” as Prudence from 2018 to 2019, a show also on Nickelodeon. She’s also made guest appearances in shows like “Grey’s Anatomy” and “Criminal Minds.”

Before she made her move to Los Angeles, she began her acting career in Wilmington when she was five with her first acting coach Tammy Arnold.

“Really, it was such a gift for her to look at me at five and be like I’m going to speak to you like an equal because I think it kind of helped me elevate treating this as a career and not just as a hobby because I wanted to do this as a career, I loved it that much,” DiBenedetto said.

To this day, she says Arnold is someone she calls when she needs advice or motivation to continue on her acting journey.

While still living in the Cape Fear, she participated in community theater at places like Thalian Hall. Her first paid project was “The Night Thoreau Spent in Jail” presented by Big Dog Productions. When she was 11-years-old, local Casting Director Tracy Kilpatrick told her she should go to LA. Her parents supported the idea and took her out west to kickstart her career.

“It takes hard work and patience because you will get a thousand nos,” DiBenedetto said. “I think people hear that and think it’s an exaggeration but it’s not. You literally will get a thousand nos. I think the fact that I’ve had some yeses is really exciting. I would just like to believe that that will lead me to more, more yeses in the future.” 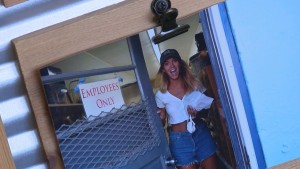 As a teenager, DiBenedetto spent her summers back on the east coast working at Britt’s Donuts on the Carolina Beach Boardwalk.

The 22-year-old credits much of her success to her support system. Her parents have had her back and supported her dream since day one, but she also scored an agent at 12-years-old that has stuck with her through all the yeses, nos, and uncertainties.

“She’s supported me through everything. That’s 10 years of growth, awkward pre-teens, she’s really always been there for me,” DiBenedetto said.

Jennifer Patredis at Innovative Artists is the agent she’s worked with for a decade and Mara Santino at Luber Roklin is her manager who joined her support system not long after Patredis.

To those hoping to take on Hollywood, she says it’s hard but the journey is worth it if it’s your dream. She suggests finding an acting class and getting involved in theater, whether it’s community or in your school.

“I believe that anything you want to do in life is kind of difficult and takes hard work,” DiBenedetto said. “Whether you want to be a lawyer, doctor, or educator it takes a lot of hard work so if this is what you want to do, don’t let that hold you back.”

Even though she’s lived in LA since she was 11-years-old, she spends her summers back here in Southeastern NC. All of her family lives here, so DiBenedetto said she would love to work on something filming in Wilmywood so that she could be close to them.

“I will always be a North Carolina girl,” DiBenedetto said.

In addition to acting, DiBenedetto says she does have an interest in writing as well. She says she loves to tell stories. With the main focus on acting, she hopes to tell meaningful stories throughout her life.

DiBenedetto says she does have another project she’s eager to announce. She can’t say much, but she’ll be in an animated Netflix show that will be out sometime next year. For more information on that and her future projects, follow her on Instagram.

Dozens gather in Rocky Point to hold march down Hwy. 210 in honor of MLK