BURGAW, NC (WWAY) — A Pender County employee with a passion for studying one the ocean’s top predators will soon release a book about what causes them to attack along our coast.

W. Clay Creswell, an environmental services employee in the Pender County Health Department, is the author of a new book to be released June 14, entitled “Sharks in the Shallows, Attacks on the Carolina Coast.” 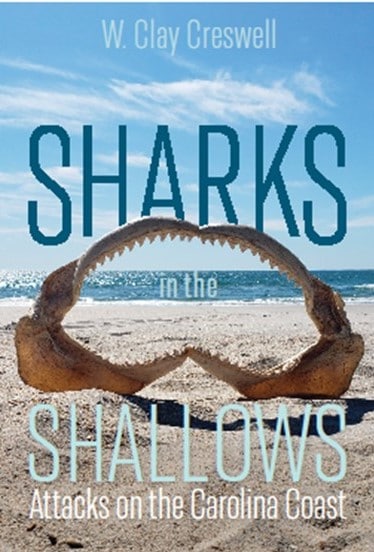 Sharks in the Shallows, Attacks on the Carolina Coast (Photo: Pender County)

“I’ve been interested in sharks since I was a child,” said Creswell, who started working in the county health department in 2002. “I wanted to live by the ocean and Pender County was my first choice.”

Creswell’s lifelong interest in sharks landed him the title of the North and South Carolina region shark-bite investigator for the Shark Research Institute Global Shark Attack File. He has been an investigator of shark bites since 2004.

“Shark attacks are extremely rare,” said Creswell. “However, sometimes we hear of a case and we start looking for information. We talk with the victim, the police on the scene, the hospital staff, and witnesses.”

Creswell said “Sharks in the Shallows” explores the rarity of shark attacks as well as what triggers a shark to bite.

“Sharks play a quality role in our ecosystem,” said Creswell. “They maintain the population of fish, reptiles, and mammals as well as feed on carcasses in our waters.”

Sharks should be respected, explains Creswell, who added that his new book is also a guide to reducing risk of encountering sharks at their peak times.

“Sharks should not be feared, but they should be treated like any other wild species,” said Creswell. “They can be unpredictable and dangerous.”

Creswell said he started writing “Sharks in the Shallows” more than four years ago. He spent two years writing “off and on” but the publishing process took more than two years. The book was reviewed by two panels, including peer reviews before going to print.

“I was impressed with the integrity of the peer reviews,” Creswell said.

“Sharks in the Shallows,” published by the University of South Carolina Press, will be available June 14 from Amazon, Barnes and Nobles, Walmart.com, and local bookstores.