Report: Woman sets fire to wrong home when trying to get back at ex-boyfriend

Deputies say the homeowner went to get the garden hose and then noticed that pieces of wood placed around a propane tank were on fire. 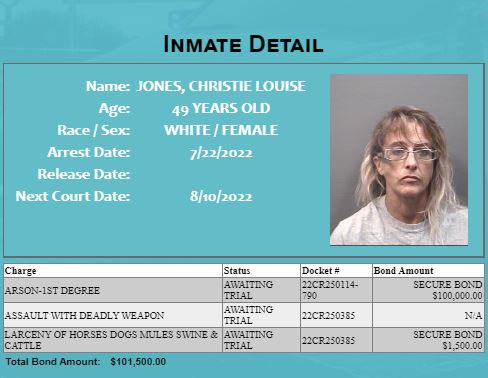 ROWAN COUNTY, N.C. (WBTV) – A woman who may have been trying to send a message to an ex-boyfriend apparently targeted the wrong house in an arson case being investigated by the Rowan County Sheriff’s Office.

According to the report, a homeowner in Gold Hill was awakened at approximately 7 a.m. on Friday by a neighbor who spotted a woman apparently trying to set fire to the house.

There were bundles of wood and a fire on the front porch and deputies later located a jug of bar and chain oil that they say was used to light and spread the fire.

The homeowner came outside and tried to get water on the fire. When he came out, he noticed a woman standing near a blue car that was blocking the driveway.

The woman was later identified by deputies as Christie Louise Jones, 49, of Richfield in Stanly County.

Deputies say the homeowner went to get the garden hose and then noticed that pieces of wood placed around a propane tank were on fire. The homeowner’s garden hose didn’t work because Jones allegedly used Flex Seal to try and seal off the water.

The homeowner then grabbed a rifle and confronted the woman.

NTSB: Copilot who jumped from plane upset about hard landing