Waterford residents share concerns on proposed 400+ apartments in their backyards

Many residents in the Waterford community in Leland are concerned about a potential new apartment complex in Belville.

LELAND, NC (WWAY) — Many residents in the Waterford community in Leland are concerned about a potential new apartment complex in Belville.

With more than 400 units, the proposed “Evolve at Waterford” apartment complex would be constructed along Poole Road, putting three-story buildings less than 30 feet from some backyards inside the Waterford community. 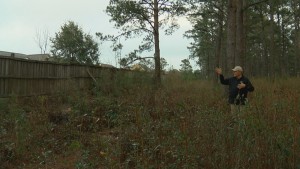 A Waterford resident demonstrates the approximate distance from his backyard to one of the 40 ft tall apartment buildings. (Photo: Sydney Bouchelle/WWAY)

The apartments were recommended for approval at the November Belville Planning Board meeting and will now go before the town’s Board of Commissioners for final approval.

At the November meeting, a traffic engineer hired by the developers of the potential complex claimed the roads were sufficient for the complex and its 800+ potential inhabitants. Waterford residents say they would like to see a traffic study performed by the North Carolina Department of Transportation. They are concerned the hundreds of new neighbors would clog up the already over-utilized Olde Waterford Way to US 17.

“We have a hard enough time getting out to 17,” Carol Huber said. “I couldn’t imagine if I needed an ambulance to come in here and they’re going to be delayed because of this traffic.”

The developers also commissioned a study on property value. Their appraiser said apartments such as these typically do not have any impact on the property values. However, Nancy Freiburger, Waterford resident and real estate agent with 40+ years of experience, disagrees with this claim.

Light pollution, security, and privacy also top the list of concerns shared by the Waterford community. While some homes in the community back up to a large berm topped with tall trees, others only have a six-foot fence. They say a 40-foot tall building in your backyard is not ideal, especially when it means bright lights could be shining into your home and people could have a front-row seat to what’s happening in your backyard.

Several residents spoke at the planning board meeting in November and have tried speaking with commissioners but feel their concerns just aren’t being heard.

“I just don’t think they’re considering any of these concerns from the surrounding neighbors in Waterford. I think we’re on deaf ears,” Homeowners Association President Arnie Owens said.

Owens along with the rest of the HOA sent a letter to Belville Mayor Mike Allen outlining their concerns for the potential development. He claims the residents of Waterford were not given adequate notice for the November meeting, saying they were only notified 10 days in advance and it did not give them enough time to hire their own experts to evaluate the impact of the project on their properties. The letter also states a number of zoning ordinances the Waterford residents believe were not followed when the planning board approved the special use permit for the development. Click here to read the full Waterford HOA Letter to Belville Mayor.

Due to the way town limits were drawn, a small portion of the property the complex is within Leland jurisdiction. WWAY reached out to Leland Mayor Brenda Bozeman and she shared the following statement.

“I respect and understand the legitimate concerns of the residents of Waterford. I support them in their efforts to express these concerns. I also understand the jurisdictional boundaries of Belville and their sovereignty, to govern their town as they deem appropriate. I hope the Belville Board members and the developer will listen to the area residents and address their concerns to obtain a reasonable compromise and resolution, if possible. I am also aware a small portion of the project that includes one of the project’s primary driveways is within Leland’s jurisdiction, which will be required to conform to Leland’s regulations through the Technical Review process. Staff is aware of this and awaits the submittal.”

WWAY also reached out to Belville Mayor Mike Allen about the concerns, but he says he cannot comment because it is a quasi-judicial procedure.

Many Waterford residents say they are not opposed to development, but they believe the proposed complex is too dense and too close to their homes.

The Belville Board of Commissioners quasi-judicial hearing for Evolve at Waterford will be Thursday at 6 pm.