WILMINGTON, NC (WWAY) — Veteran’s Day is just days away and one disabled veteran is calling on the community to help him find his bike.

Riding his bike is one of Kevin Hebert’s favorite pastimes and it’s something he worked very hard to be able to do.

When he was 19 years old, he served in the U.S. Air Force. That’s when he broke his neck, leaving him paralyzed from the neck down.

After working with the VA in Boston, Hebert eventually relearned to walk with a brace on his legs. Two years ago, the recreation director at the VA worked with Hebert to get him his adapted bike.

“She asked me what I really wanted to do and what I missed most being in and out of a wheelchair, and I said riding a bike,” Hebert said. “It really increased my independence. I’m able to get out there, I don’t have to rely on the wife to push me, I can do it myself. It just gives you that feeling — I can do it myself and I’m in a really cool bike.”

In September, Hebert and his wife moved from Massachusettes to Wilmington — partially because of the great bike-riding weather.

“What’s amazing is since we’ve been here for six weeks, I’ve only missed four days of riding. You can’t get that kind of riding in Massachusettes, you can only get it down here,” Hebert said.

After a picture-perfect ride in Kure Beach on Friday, the bike was stolen on Saturday. However, Hebert says he is choosing to say the bike is only missing.

“There are nice people in the world. Maybe something happened, they saw it and scooped it up. Maybe they were just intrigued with it and when they figure out, ‘hey, maybe this bike isn’t for me maybe it was made for someone special.’  I don’t think I’m special, but I like to think the bike is special. It’s definitely special to me,” Hebert said.

Hebert’s wife says she went outside of their apartment on Saturday morning around 7 am and saw the bike where they left it the night before — right outside their door with the lock on the wheels. When the two went back outside around 10 am for a ride, the bike was gone. 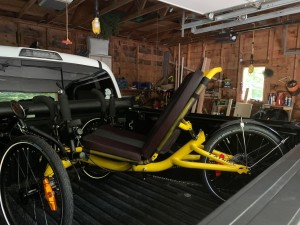 When he first got the bike, Hebert placed a tracker in the bike so he and his wife jumped in the car and followed the tracker. It led them to Carolina Beach Road, but they did not find the bike.

“It’s been a lifesaver for me getting around and about,” Hebert said. “It means a great deal to me so if anybody out there has seen this bike, I’d really appreciate any information at all that we can get.”

WWAY asked what Hebert would do if someone showed up with the bike at his door and apologized for taking it.