WILMINGTON, NC (WWAY) — Spring is less than two months away, and that means baseball season is quickly approaching.

The Wilmington Sharks have released their 2023 schedule, highlighted by 35 home games at Buck Hardee Field. 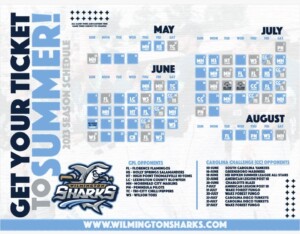 All new games and entertainment are planned for this season between innings, according to the team.

Full season tickets and flex plans are on sale now, and can be purchased HERE.