WILMINGTON, NC (WWAY) — Some of the best Wilmington area basketball players plan to compete later this month at the 2nd Annual Kris Clark-Tamera Young Kill Cancer 3 on 3 Basketball Tournament at the MLK Center on Saturday, July 30. The event is scheduled to start at 4pm. ”When I was in high school I lost my father to brain and lung cancer,” Clark told us WWAY at last year’s event. “That is something that continued to push me. I always kinda sat back and thought how can I better myself by losing my father at a young age.” Clark has several years of pro basketball under his belt. The 2003 New Hanover High graduate recently played a pro basketball season in Boliva, South America. The former Utah State standout also played in the NBA D-League recently with the Westchester Knicks.

Tamera Young recently lost her father to cancer as well. Young’s father died in April of 2015. “We wanted to raise awareness and raise money to give to the cancer society for research, Young said. “We didn’t charge people, but we asked if they’d leave donations so we can donate it to the society.” Tamera Young is a Laney High graduate. She played college basketball at James Madison. She’s a WNBA veteran.

To register: (deadline is Saturday morning on 7-30) 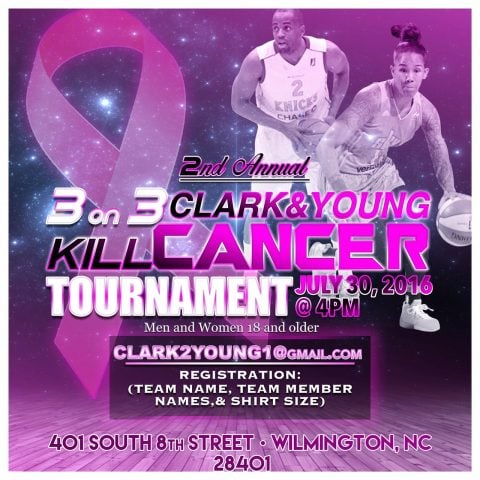