FAYETTEVILLE, NC (WWAY) — The Fayetteville Public Works Commission is seeking approval from the Local Government Commission (LGC) to issue up to $198 million in revenue bonds to continue installing water, sewer and electric service in areas the City of Fayetteville annexed more than a decade ago.

The LGC, which is chaired by State Treasurer Dale R. Folwell, CPA, and staffed by the Department of State Treasurer (DST), has a statutory duty to monitor the financial well being of more than 1,100 local government units. The commission also examines whether the amount of money units borrow is adequate and reasonable for proposed projects, and confirms the governmental units can reasonably afford to repay the debt.

A number of other airport, government building, infrastructure and refinancing requests are on the agenda for the Tuesday, Oct. 5, meeting.

In 2005, Fayetteville initiated what came to be known as the “big bang” annexation, with promises to bring utility service to 8,000 households. The $198 million in bonds are the most recent funding request for the infrastructure to provide these services. The commission also will consider a request to refund existing bonds at a lower interest rate for nearly $4.5 million in savings.

The City of Greenville is seeking approval of up to $20 million in limited obligation bonds to build a new fire station and extend an existing bay, construct a swimming pool and park, remodel a community center and acquire public safety equipment. No tax increase is expected.

Up to $16.8 million in limited obligation bonds sought by the city of Hendersonville would be used to build a 253-space parking deck; improve streets, sidewalks, gutters, sewer and stormwater facilities; and refund an existing financing contract to reap nearly $200,000 in lower interest payments. No tax hike is anticipated.

The Town of Oak Island is requesting LGC to approve special obligation bonds of up to slightly more than $10 million to renourish and maintain the town’s beachline, which was damaged by hurricanes Matthew and Florence. The bonds would be secured by future Federal Emergency Management Agency reimbursements and other sources.

The Town of Apex is seeking a green light to obtain a bank loan of $8.7 million to build a new public safety facility that includes a fire station and police station, and a new town Inspections Department building. No tax increase is proposed.

The Town of Wendell is seeking approval of a bank loan for $11.3 million to build a new town hall and a new road. The money also would be used to purchase land for a police station, fund a neighborhood improvement project and fund development of Holybrook Park. No tax hike is planned.

Other requests before the LGC include: 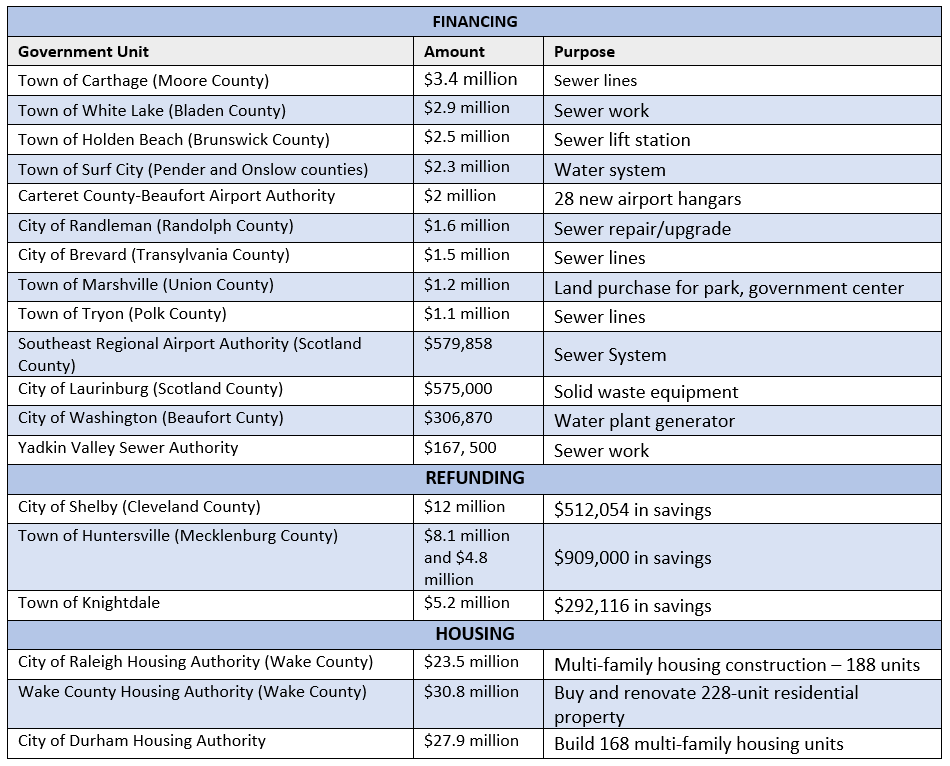