SOUTHEASTERN NC (WWAY) — A cluster of great white sharks were recently spotted off the Carolina coast and researchers are praising the discovery.

“It’s actually a really, really great sign for the region because when you have white sharks moving in there it means that the system’s balanced and abundant,” Chris Fischer, the Ocearch founder, said.

He is currently at sea on an expedition with Ocearch leading a team of 22 scientists and fisherman in making remarkable discoveries in the deep blue sea.

“We can capture the animals,” Fischer said. “We give the scientists 15 minutes with them to do up to 20 research projects with and now one of which is attaching a tag on their dorsal fin and then every time they stick their dorsal fin out of the water for more than a minute it pings their real time location.”

Fischer says this tagging is what helped crews spot the cluster of 8 great white sharks off of the Carolina coast.

“Well, it’s not uncommon for them to be down in this region,” Fischer said. “It’s interesting to see that they’re all up in a small area. They’re usually stretched out between Cape Hatteras, North Carolina and Cape Canaveral, Florida.”

The North Carolina Aquarium at Fort Fisher Associate Director Brian Dorn says these ‘guardians of the sea’ have always been out there, but research groups like Ocearch have used advanced tagging technology that can now track the fish.

“There are thousands of other ones that are still out there that we don’t have tags on and are traveling off our coast at the same time as well,” Dorn said.

Dorn says the sharks are starting their migration back up north and often stop along the way following their food. 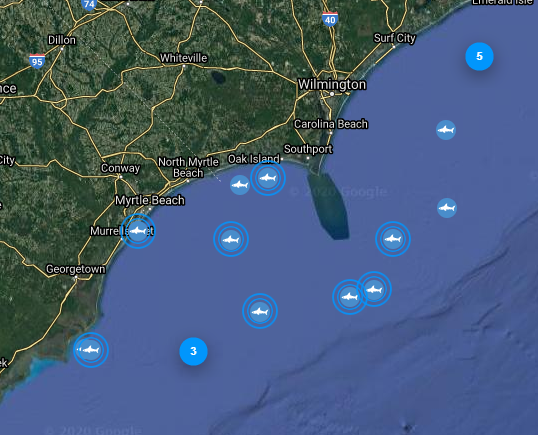 He says this spotting is a good sign for the marine ecosystem.

“Without sharks as the caretakers of all things below them we would have explosions of other fish that would basically take over ecosystems and resources not controlled by these top predators,” Dorn said.

Dorn and Fischer agree, to keep them all in one spot for so long, food is likely the reason.

Dorn says the tagging can only confirm where the sharks are located when their dorsal fins are above water, so the locations can be outdated. They’re likely to shift north soon as the migration continues.