Husband and wife grateful to be alive, still searching for dog after devastating fire

A family is turning grief into gratitude after losing their home last week in Holden Beach.

HOLDEN BEACH, NC (WWAY) — A family is turning grief into gratitude after losing their home last week in Holden Beach.

Charles Caspari is counting his blessings after he and his wife, Christine Kuntz, got out of their home safely on Thursday evening after a fire broke out.

“I thought I’d left a pan on the stove, so I went to the stove first and didn’t see anything there, so I walked downstairs and saw fire in between the two houses,” Caspari said.

Caspari grabbed the water hose and called 911. He quickly decided the fire was beyond his efforts, so he went back inside for his wife.

“The house was enveloped in black smoke. We couldn’t find each other. She grabbed my hand in the dark through the smoke. I couldn’t breathe,” Caspari said. “I’m surprised she made it. I was right by the front door and I couldn’t get in to get her.”

The two got out with nothing more than the clothes on their backs. Kuntz didn’t even have shoes on.

One of the most important things left behind is their dog, Neptune. Caspari isn’t sure if the German shepherd ran off or was trapped inside the home. 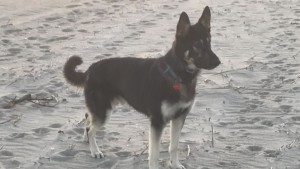 “I’m still searching for the dog today that’s what I was doing over here. Kind of hoping…I’m afraid he might not have made it. I’m losing hope,” Caspari said. “He slept with us, he was my faithful companion. I’m hoping maybe someone picked him up, maybe he’s over on the mainland with some people, I don’t know. We can only pray, right? If not, then the dog’s in Heaven.”

On the night of the fire, the community immediately jumped into action. Neighbors set out to search for the dog, and it’s something they have done daily since the fire. Several people offered their homes, clothing, appliances, and more. Their friends Randy Clemments and Sharon Milne have taken them into their home until they find a place to stay.

“We’ve had great support and love from the community,” Caspari. “There’s been a lot of love here.”

Caspari is the primary caretaker for his wife because she has dementia. He says the coming days will be a challenge, but the community and being alive today is a blessing.

“Thank God. What else can you say? Thank God,” Caspari said.