WILMINGTON, NC (WWAY) — A conversation in Wilmington brought together descendants of slaves and relatives of confederate royalty. All of it in an effort to discuss the impacts of racial disparities and confederate markers or monuments.

It was hosted by local chapter of the National Black Leadership Caucus and Castle Branch.

The discussion surrounded the continued influence of the confederacy on the community according to co-organizer Joe Finley with Castle Branch, tek Mountain. He says this is evidenced by the disparities we see between black and white citizens in Wilmington in almost all measurable categories; education, economic advancement, health outcomes, arrests, etc.

“Dr. King had a dream that sons of former slaves owners and former slave captives will gather together at the table of brotherhood so that’s what we’re trying to do here tonight just a little part of it,” said caucus chapter leader Sonya Patrick-AmenRa.

AmenRa says she is a descendant not only of former slaves, but members of the Union Army colored troop units that fought in the American Civil War. On the other side, an ancestor of the key not speaker for the evening discussion. Rev. Rob W. Lee joined the panel discussion and spoke. Lee is a descendant of Confederat General Robert E. Lee.

“We have to engage in specific policies and procedures that end systemic racism,” Lee said. “We can all have a part in that whether we’re a citizen of Wilmington or of Statesville like I am. We all have our part to play in this conversation.” 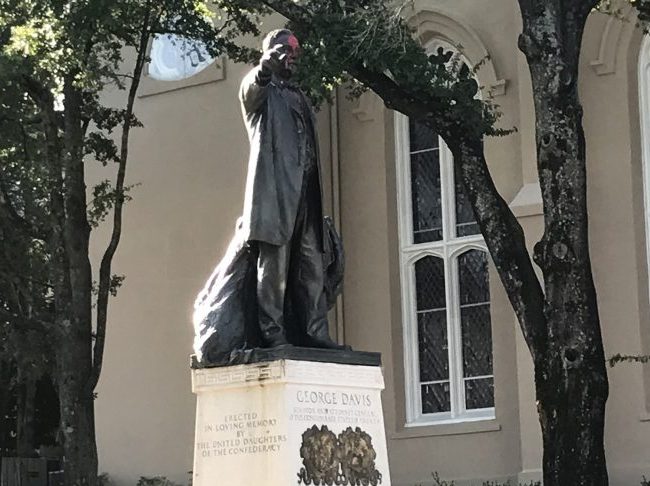 A Confederate statue at 3rd and Market Street in Wilmington has spray paint on it. (Photo: Hannah Patrick/WWAY)

Those who took part in the discussion were also given a chance to sign petitions asking Wilmington city leaders to begin discussions about the downtown monuments and their possible relocation.