The “Street Outreach Specialist Pilot Project” is a one-year pilot program to help connect people living and sleeping on the streets of downtown Wilmington with the necessary services to help usher them on a path to wellness within our community.

BBB manages similar initiatives in Charlotte, Cincinnati, Austin, Minneapolis, and other cities throughout the country.

The initiative is an initial collaboration between WDI and the City of Wilmington but will take a collective effort among all our elected leaders and regional service providers, including shelters, addiction services and nonprofit organizations, as well as the downtown business community.

WDI contracts with BBB to run its MSD Ambassadors Program, which started in 2017 and currently has four employees providing an array of services to downtown businesses and patrons.

The new Street Outreach Specialist position will be a full-time position created within the existing MSD Ambassadors Program.

This new role was approved by the Council-appointed MSD Advisory Committee on August 19. Recruitment is underway to find a qualified social worker to fill the new position. BBB is currently conducting job interviews to find the right candidate to lead this effort in our downtown.

This new project, which is being funded by MSD tax dollars, is supporting one trained social worker employed 40 hours per week at $20 per hour, the equivalent of about a $63,000 position, including benefits and overhead.

The role will help support downtown’s homeless population by connecting those who are receptive to receiving help with necessary social services and includes providing transportation.

Support from this position will include helping individuals to access social services, obtain entitlements, overseeing case management, and other responsibilities related to reducing barriers to service.

A total of $1,500 is set aside for the Street Outreach Specialist to arrange transport to get downtown’s unsheltered to the area’s services.

The initial three-day assessment conducted this month provides WDI with a baseline to gauge the effectiveness of the program in the future and evaluate where the new Street Outreach Specialist should focus efforts.

BBB’s presentation to WDI provides homelessness counts, observations, and recommendations based on Lockhart’s initial assessment of downtown Wilmington this month. See below:

The approach/objectives of the site visit to Wilmington were to:

● Make observations of the number of people at the street level to gauge the size and impact of the downtown street living population.

● Understand who the population is, why they are downtown, and the challenges they are facing.

● Understand challenges faced within the district itself.

● Conduct one-on-one conversations with downtown’s unsheltered population to gain a perspective of the services that are available, and if people are currently engaging them in seeking assistance.

● Gather thoughts from the unhoused population about how they are treated in the community and gauge if they trust the system of services that are offered in Wilmington.

● Gauge how receptive downtown’s unsheltered would be to an outreach person helping them navigate the social services currently available.

● Find out how people visiting downtown felt about the presence of the unhoused population.

● More than 30 individuals at a given time were seen sleeping in the downtown Wilmington MSD consistently during the three-day assessment.

● Panhandling was limited; less than five individuals were found panhandling at the time of the study.

● Transients are visible throughout the day at various locations — several were seen hanging out and drinking alcohol — but don’t sleep in the district.

● Drinking amongst the unhoused has led to arguing or threatening behaviors toward one another.

To quantify the impact of the street-level population, counts were performed at three specific intervals of the day (at 8 a.m., 12 p.m., and 8 a.m.) on a consistent route, which included walking paths from Grace to Market streets and from Water to Fourth streets.

About 90% of the unhoused individuals sleeping downtown were seen in the mornings and evenings. 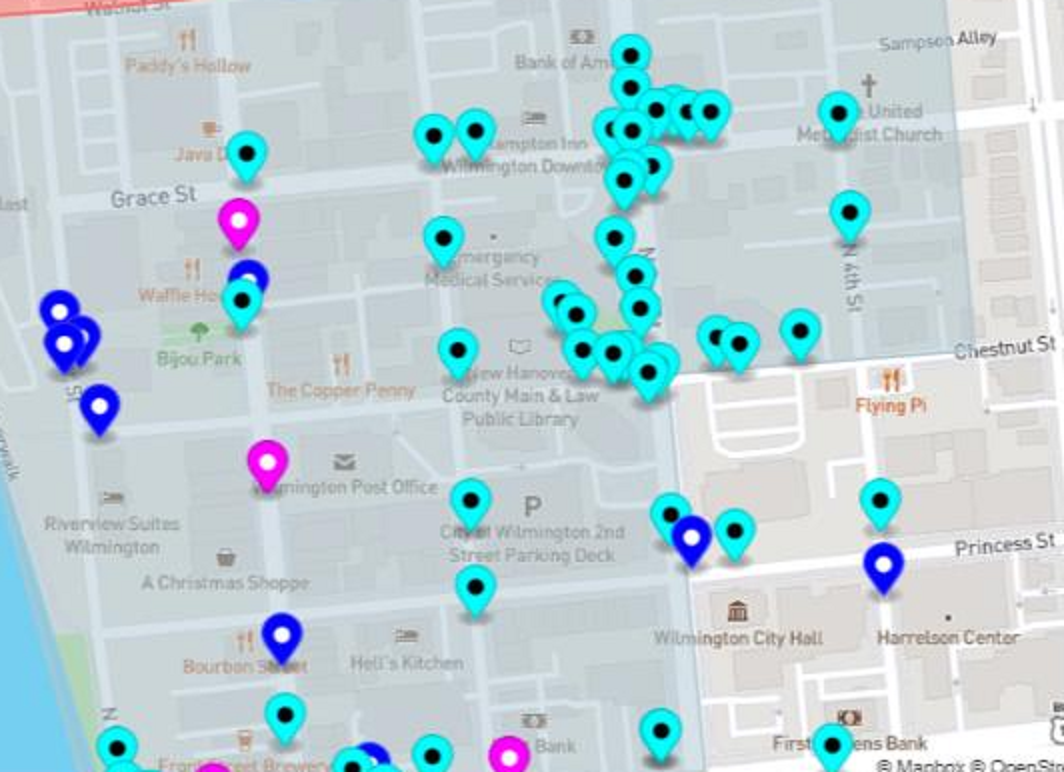 The map above details the classification for the population encountered and counted during one walk path circuit by BBB. The light blue represents people that were sleeping and/or had multiple bags in their possession; dark blue displays transients counted; and pink displays those panhandling in the district.

● There is currently a shortage of shelter space available, and there are gaps that will need to be addressed for effectively providing these services. Several organizations were contacted, including the Salvation Army, Good Shepherd Center, Gospel Mission, and Wilmington Treatment Center.

● Many people sleep on the streets because they are not able to access shelters due to the pandemic and/or other barriers to service.

● Many of the unsheltered have addictions that need to be addressed. However, there must be places people can access even with current substance abuse issues so that they can be in a safe place for themselves and others.

● The MSD’s unhoused would be more receptive to services if they have a place to which they know they can return. Most people stated they would prefer to be in a safe environment while working towards permanent housing.

● There could also be an opportunity for those working in the shelters to assist with referrals and navigation through the social service system.

● Many also report they can get up to five meals a day, so issues with hunger seem limited in Wilmington.

● People are very caring in Wilmington, which could make people less likely to seek a change in lifestyle or behavior.

● There are several people who have lost faith in the system feeling “it is just talk” from those offering to help.

● More coordination is needed between providers to conduct feedings and clean up, as well as to facilitate service connections and housing.

● A push is needed to have all social services, outreach, and mental health professionals meet people during the feedings. If there is a coordinated approach this will lessen the chance of someone slipping through the cracks. This may also restore faith and may give hope that the community is really trying to help them.

● Policing of the unhoused is only engaged when there is a request for service (911 call). It seems there is currently no ordinance that will give law enforcement the ability to remove people sleeping within the district.

● There seems to be no ordinance regarding storing of property in the public right of way. A place where people can store their items in a safe location could help keep property from being spread throughout the district and left unattended.

● It would be ideal to have social service providers coordinate a joint effort in helping the population, including representatives of shelters, mental health services, and substance abuse counselors.

● MSD Ambassadors can be utilized to spread knowledge about where to access food, as well as specific knowledge about the area’s resources. It would be helpful to have an up-to-date resources and services providers list on hand, including hours of operation and contact information for accessing these resources.

● Churches or other organizations that want to help could coordinate more space for people to sleep during the day and keep them from sleeping in public spaces.

● Exploring some space for unsheltered people to store their belongings could improve the appearance of downtown.

● It’s recommended the police patrol more at Third and Grace streets where it seems most of the illegal activity is occurring. Amplified police presence could significantly decrease negative behaviors, and perhaps lead more people who are currently unhoused to think about accessing services and seeking stability.

“Ultimately, there has to be services that are made more accessible for people in order to be effective. Otherwise, people will continue to lack hope that there is help or something better for them in Wilmington,” Lockhart said. “Hope needs to be restored in order for people to want to change their situation.”