SHALLOTTE, NC (WWAY) — A Brunswick County assisted living facility has been shut down, and the director and several employees are facing criminal charges.

Shallotte Assisted Living Community is owned by Johnson Adult Care, LLC, a company based out of Shelby. A suspension notice addressed to Georgette Johnson from the Department of Health and Human Services dated February 26, 2020 ordered the facility to be shut down by 5:00 p.m. the same day. 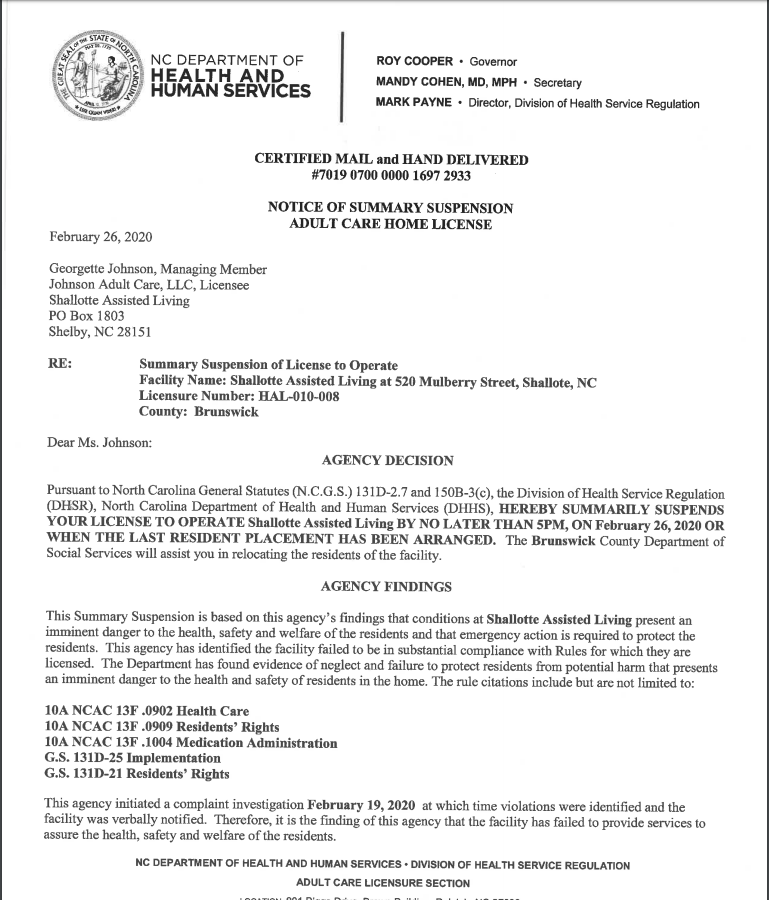 The suspension states conditions at the facility presented “an imminent danger to the health, safety and welfare of the residents.” Rule citations include health care, residents’ rights, medication administration, and more. This stems from a complaint investigation initiated one week ago on February 19.

According to a news release from the State Bureau of Investigation, a separate investigation by the SBI and Shallotte Police Department began more than a month earlier on January 3. That was initiated after approximately 3700 dosage units of controlled medications at the facility were reported stolen. 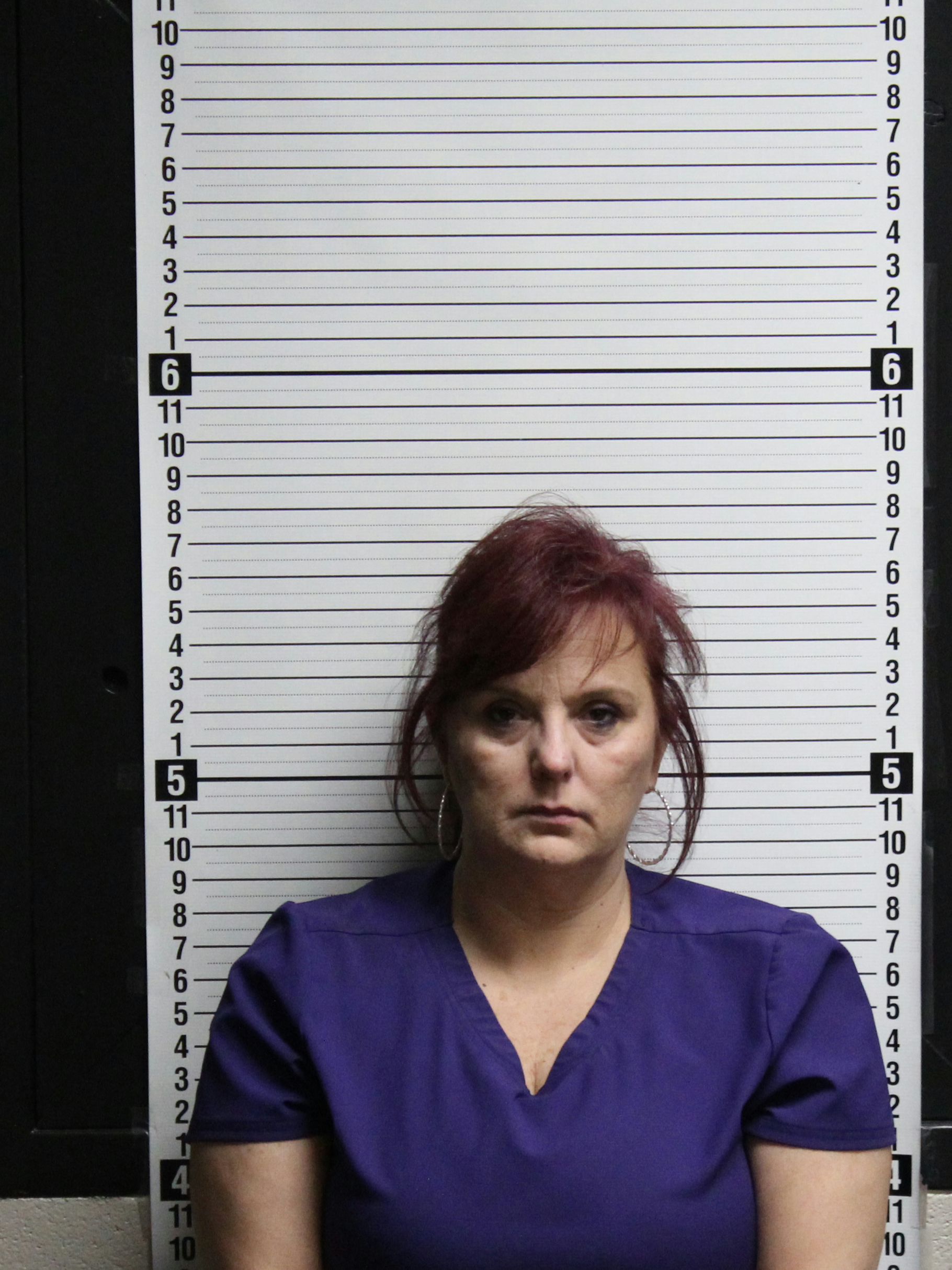 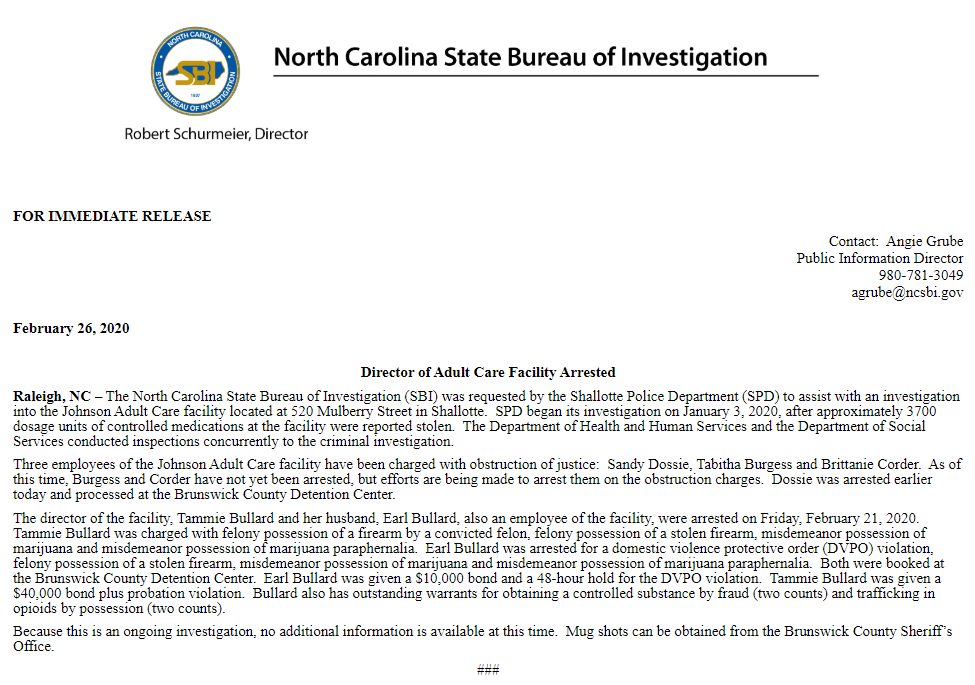 Three other employees have been charged with obstruction of justice: Sandy Dossie, Tabitha Burgess and Brittanie Corder. Dossie was arrested Wednesday and processed at the Brunswick County Detention Center. Authorities are still working to arrest Burgess and Corder.

Meanwhile, residents and their families had little to no notice about what was happening. The daughter of one resident told WWAY she only knew her mother was being moved because an employee she knows gave her a call. She says when she arrived, she learned they planned to move her mother to a facility three hours away.

The cousin of a resident told us conditions at the facility had been deteriorating for months.

“The food was getting really bad, where the food looked like it was for dogs to tell you the truth,” Virginia Cotugno said. “It was like slop, you don’t even know what they were eating.”

She says she became suspicious when money started to disappear from her cousin’s account.

“If this is what you do to people that count on you for help, she should rot in jail for all I care,” Cotugno said.

This isn’t the first time the facility has been under scrutiny. In 2013, the facility was fined $64,500 by the state for failing to protect residents from mental and physical abuse, and for failing to maintain rules about controlled substances and personal care and supervision. As recently as August 2019, they were fined $9,000.