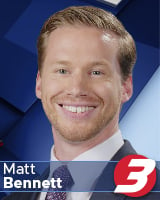 Matt Bennett moved to Wilmington in September 2016 just before Hurricane Matthew tore through the region! He joined the WWAY team later that December as a Production Assistant. He was promoted to Producer in July 2017, producing weekend newscasts and assisting with Good Morning Carolina. Matt transitioned to a Reporter role in June 2018 before becoming Weekend Anchor in August 2019. He briefly stepped away from news in November 2021 before returning in April 2022 to co-anchor Good Morning Carolina with Donna Gregory.

During his time at WWAY Matt has covered several major local stories, including Hurricane Florence, the sale of New Hanover Regional Medical Center, and weeks of protests following the death of George Floyd. Matt recently accepted an RTDNAC award for his coverage of explosive school board meetings during the COVID-19 pandemic.

Matt is from Cherry Hill, New Jersey and is an avid Philadelphia sports fan. He graduated from Salisbury University in 2014 with a B.A. in Communication Arts. Matt’s passion for TV news dates back to middle and high school where he participated in live and recorded broadcasts (shoutout Mr. Musumeci!)

When he’s not at work, Matt enjoys going to the beach, waterskiing, snowboarding, and playing video games. He is also a car enthusiast, and traveled across the country in his classic imported van with his girlfriend (now fiancé) in 2021. You may be able to catch him at Cars and Coffee at The Pointe at Barclay.

Matt has volunteered with Good Friends of Wilmington and emceed events at the Wilson Center. He lives in downtown Wilmington with his fiancé Anna.

‘Teacher of the Month’ inspires apprehensive students to excel

‘Teacher of the Month’ leads gym class without a gym

‘Teacher of the Month’ has dedicated 30 years to special education

‘Teacher of the Month’ eases kindergarten students into educational journey

Trump says he took the Fifth Amendment in NY investigation

Fallen heroes to be honored in Veterans Memorial Reef ceremony