Team of the Week: Laney Buccaneers

WILMINGTON, NC (WWAY) — For some reason or another only three of our local high school football teams won last week and that’s not normal. West Brunswick, Pender and Laney were the victorious three and we decided to go with Laney as this week’s recipient. Obviously, we did our part. Will the Buccaneers do their part in making this an historic presentation?

Laney quarterback Sherod Sidbury worked his magic on the gridiron last week, but Sidbury was not alone. This was an overall team effort. Laney is now 3-2 on the season after the 31-7 victory over East Bladen. “We executed in all three phases of the game.” Laney head coach Ashaad Yeoman told WWAY. “Defensively we stopped them when we needed to. We knew it was going to be tough both offensively and defensively because they like to run the ball and control the clock.”

Speaking of clock, Laney scored 14 of their 31 points in the last 25 seconds of the first half. “The win against East Bladen was a big one,” according to Laney senior Ryan Daborowski. “It gave us a lot of confidence to show that we can play against a great football team, and we did not want to lose to them two years in a row.”

“This game can show us what we really can do,” Laney’s Alex Willis said. “We are going to be a good team and we have what it takes.”

The difficult non-schedule part of the season is now over for Laney. What do the guys in blue and black think about the conference opener this Friday? For the answer to this question you’ll need to watch the attached video. It’s not quite cut and dry whether the Buccaneers wanted to be the WWAY-Farm Bureau Insurance Team of the Week for the second time this season, or not. Check it out. 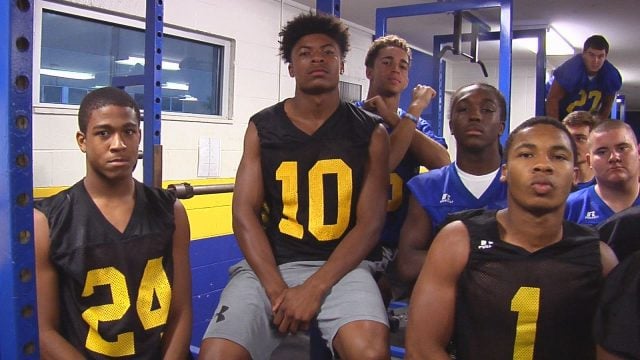