Langlois, who began work with the town on Monday, Aug. 17, was officially sworn in as Leland’s Fire Chief during a ceremony on Monday, Aug. 24 at Leland Town Hall. He fills the position left vacant by John Grimes, who was named as the Town’s first Emergency Management Director in April. Deputy Chief Ronnie Hayes served as interim fire chief prior to Langlois’ arrival.

“His experience – and his dedication to community – make him an ideal person to continue the mission of Leland Fire/Rescue and to help the department evolve as the Town continues to grow,” Grimes said of Langlois. 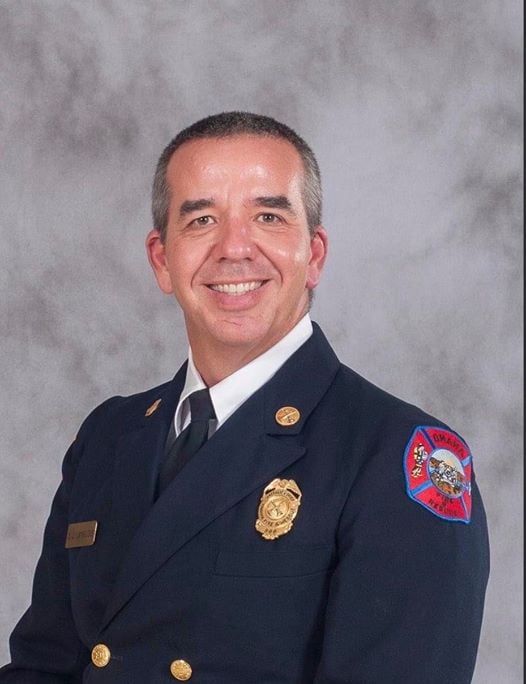 Langlois spent the last 20 years in Omaha, Nebraska with the Omaha Fire Department, which serves approximately 500,000 residents, operates 24 fire stations and has a team of 650 firefighters. Originally hired as a firefighter, Langlois rose through the ranks as a paramedic, fire captain, training officer and battalion chief. In that most recent position, he oversaw the safety and wellness division of the Omaha Fire Department.

He first developed a passion for fire service more than three decades ago at the age of 17 in his hometown of Jeanerette, Louisiana, and later became one of the first paid firefighters for the Iberia Parish Fire District #1.

“I was drawn to firefighting, as many other firefighters were, by a family member,” Langlois recalled. “My cousin was a volunteer firefighter and got me involved, mentoring me along the way. I became passionate about fire service because it allowed me to be a part of a team that showed up on the worst day of someone’s life and did whatever was needed to try to make it right. The ability to be a part of turning chaos into order and to really make a difference in someone’s life has had a lifelong impact on me.”

After 20 years in Nebraska, Langlois decided to return to the south and, in the process of that pursuit, discovered the Cape Fear region.

“I had never been to North Carolina before. However, I had a desire to return to my roots in the southern area of the US and to be near the ocean. During my research of the area, this seemed like a perfect fit,” he noted.

He similarly found his “perfect fit,” career-wise, with the Town of Leland.

“The core mission of every fire department, summed up in one word, is service. The Town of Leland really emphasizes the concept of servant leadership, and it became apparent to me that these were not just words; they were a part of the culture. That shared belief is what drew me here to Leland,” he said. “Similarly, Leland Fire/Rescue has a long history of service to the community. I am looking forward to serving alongside members of the department to continue that service and create more excellent outcomes for our community.”

Among other professional accomplishments, Langlois is a graduate of the Executive Fire Officer Program at the National Fire Academy, has a bachelor’s degree in Public Fire Administration from Upper Iowa University and a master’s degree in Executive Fire Service Leadership from Grand Canyon University, and holds numerous certifications from the International Fire Service Accreditation Congress.