NEW HANOVER COUNTY, NC (WWAY) — A large group of people gathered outside Tuesday’s New Hanover County Board of Education meeting, demanding to be let in while also refusing to comply with the mask mandate.

The group, advocating for parent choice, became incensed after a man was forcibly removed from the meeting by sheriff’s deputies for refusing to wear a face covering. 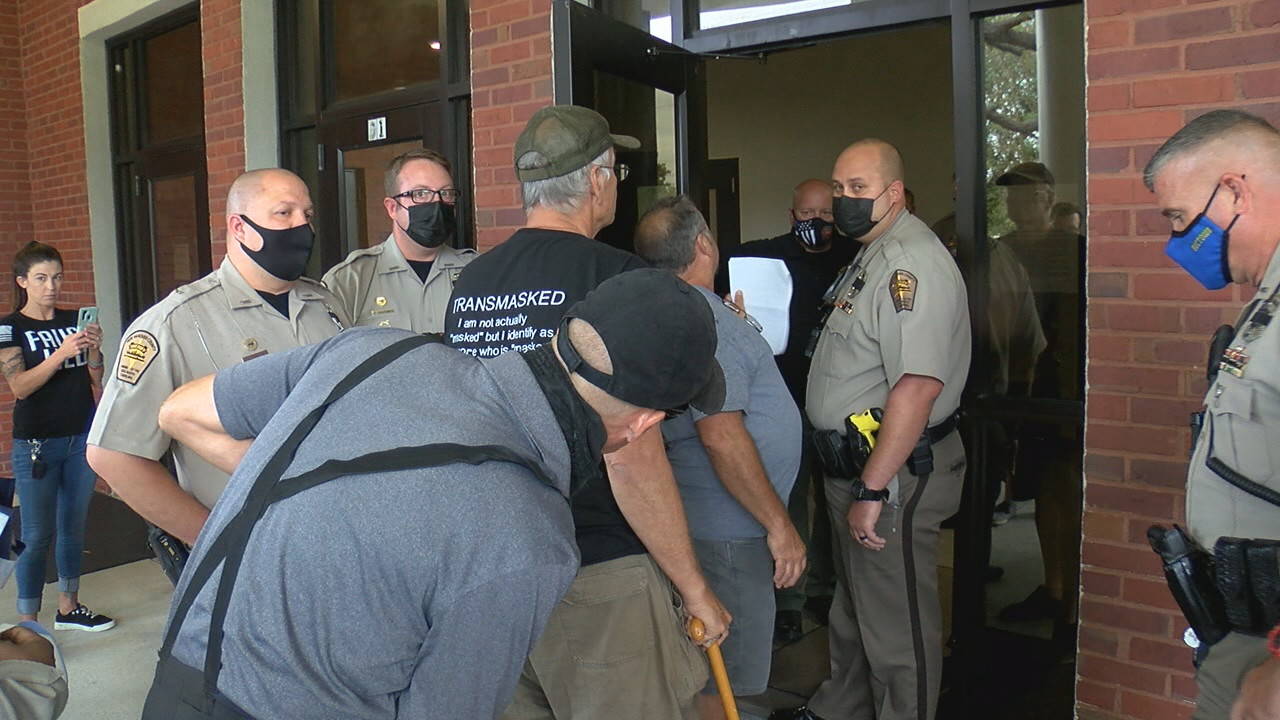 A group demands entry to a Board of Education meeting on October 5, 2021.
(Photo: Matt Bennett/WWAY)

Some in the group heckled deputies and demanded to speak to Sheriff Ed McMahon. One man compared wearing a mask to drinking one’s own urine.

A line of deputies soon blocked the door, denying entry to anyone who would not put on a mask. Anyone who complied was allowed inside.

One member of the group, Maverick Doane, spoke with WWAY about the current mask mandate for students, teachers, and staff. He says although he doesn’t have children, he has strong feelings about the policy.

“It is absolutely despicable what they are doing with our kids, they’re taking the choice away from parents,” Doane said. “I am not in favor or not in favor of masks, I just simply believe that it should be up to the parents to decide what is best for their children and not some government agency to take that decision away from them.”

The board ultimately voted 6-1 to keep the mandate in place, with Pete Wildeboer casting the dissenting vote. The board will vote again next month, as required by law.

Meanwhile a group of educators also gathered ahead of the meeting, focused on another issue. They say they are overwhelmed by a shortage of substitute teachers, and are asking for increased pay:

“Every day at Ashley High School we do not have enough substitute teachers. Every single day we are asked to cover other classes,” Holland said. “During our planning periods, we need that time to correspond with parents and their students, correct papers, draw up our lesson plans, and if we don’t have that time during the day because we’re using it to cover classes, then we’re doing that at home at night, on our own time.”

The board did hear a presentation on teacher pay. You can watch the entire meeting here.