OAK ISLAND, NC (WWAY) – You may remember that when Donald Trump was running for President he held a rally at UNCW’S Trask coliseum.

That speech garnered national attention when Mr. Trump made a joke about gun-rights supporters, which drew a candid reaction from a local man sitting behind him.

That man was Darrell Vickers of Oak Island. His reaction to the comment itself went viral. 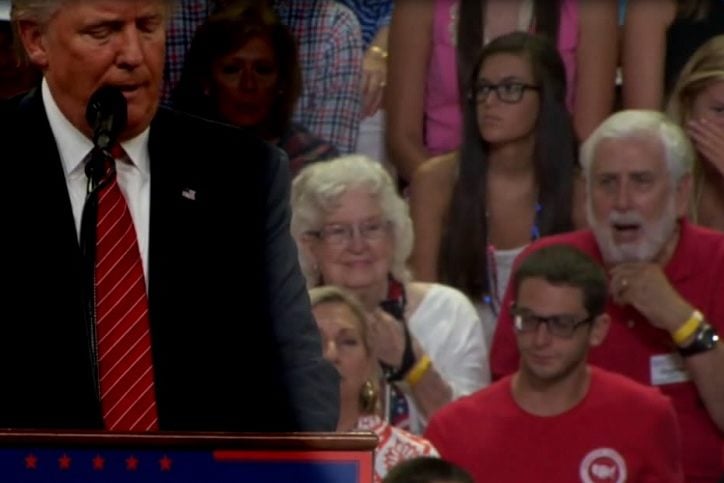 Darrell Vickers in 2016 during Candidate Trumps speech at UNCW.

On the evening when President Trump gave his first state of the union, WWAY’s Andrew James watched the speech with Vickers,who supported the president in 2016, to get his latest reaction.

The speech was well received in the Vickers’ household. Vickers was surprised at the rhetoric candidate Trump would use, and he was also surprised with the rhetoric of the SOTU. He was pleasantly surprised though this time around.

Vickers pointed out Trump’s use of the human element, inviting the family who adopted a child that’s mother overdosed, bringing a small business owner and worker, and also the parents of the college student that was detained in North Korea.

He said although that’s similar to previous addresses, it’s not common for Republican candidates to go for that emotional tone. He was certain he’d hear mostly numbers and figures from the President.

He found the speech overall to be strong and hopes people at the very least find it encouraging.

“Be encouraged, be encouraged that the team, not Trump, but the team is working on solutions to the problems that we have and it’s going to be a solution that encompasses everyone,” Vickers said. “Not just a privileged few and I think that is a great misconception that we have.”