WILMINGTON, NC (WWAY) — Wilmington Police say crime in the Port City is at its lowest rate in nearly a quarter century.

Evangelous says the number of Part 1 crimes has dropped steadily since 2003, even as the city’s population has grown. Last year the crime rate 4.67 percent compared to 12.13 percent in 1993. In raw numbers, that about 1,500 fewer Part 1 crimes reported last year compared to 1993 even though the city’s population has nearly tripled in that time, according to WPD’s statistics. Last year marked the seventh straight year Wilmington’s crime rate has dropped.

Evangelous credits the reduction to hard work by his department, partnerships with other agencies, technology like ShotSpotter and even social media and the local news media, which he says have helped get messages out and get information from the community quickly and efficiently. 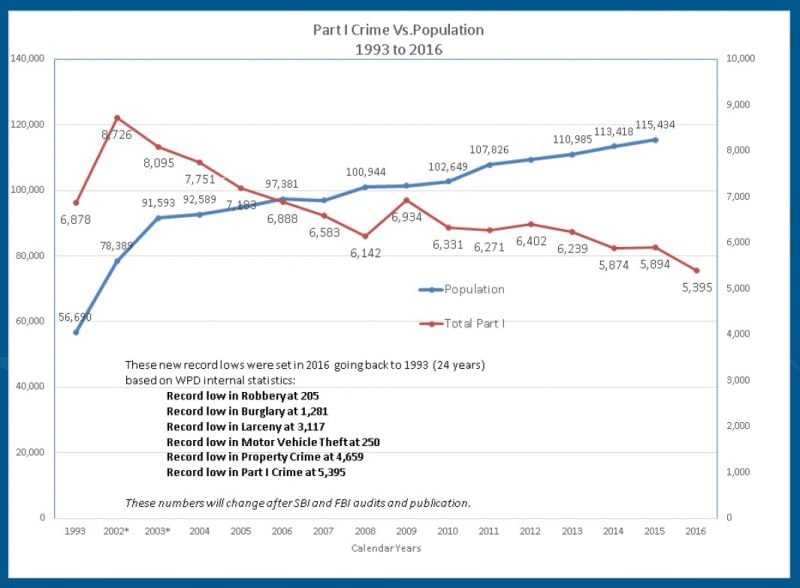 The chief says crime in Wilmington is driven by a few factors, like gun violence, gangs and the opioid epidemic. He says the city must get a handle on those problems, including drive-by shootings, which he says happen at a high rate for a city Wilmington’s size. Of the city’s 15 homicides in 2016, Evangelous says 10 involved guns. Eight were gang related.

Evangelous said work to clean up the motels on Market Street, which he says gangs have used to run Wilmington’s heroin trade, has had marked impacts, but there is still work to be done.