President Trump on Tuesday said he has directed Attorney General Jeff Sessions to draft regulations that would ban any devices that would turn legal, semi-automatic firearms into automatic weapons, after studying the issue of bump stocks in light of the Las Vegas shooting in October. The president made the remarks from the White House East Room, as he hosted the Public Safety Medal of Valor Awards Ceremony.

The comments marked the president’s first public appearance in Washington since his brief speech Thursday after the Parkland shooting, and his remarks on bump stocks are the first he has made definitively proposing a policy solution related to gun control. Mr. Trump said his memo to Sessions directing the change came after months of reviewing the issue. The president has also indicated he would be open to universal background checks, which have wide public approval. The suspect in the Parkland massacre, 19-year-old Nikolas Cruz, did not use a bump stock device.

The president said he is “grieving for the community of Parkland in the great state of Florida.”

“We’re working very hard to make sense of these events,” the president told members of law enforcement and first responders there Tuesday.

The president, echoing something Vice President Mike Pence said over the weekend, said school security will be a top priority for his administration.

The Justice Department did not give a timeline on when such regulations — which must go through a comment period and could be subject to legal objections — will be completed.

“The department understands this is a priority for the president and has acted quickly to move through the rulemaking process,” the DOJ said in a statement. “We look forward to the results of that process as soon as it is duly completed.” 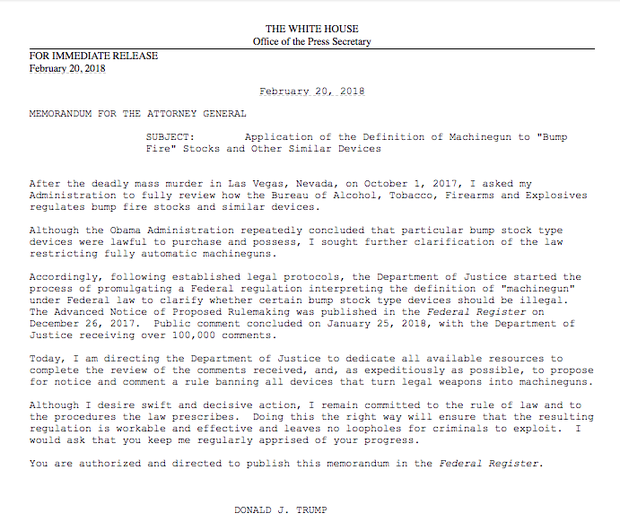 The president also called for better physical protection of schools, and for better coordination between federal and state law enforcement in order to take “swift action” when there are warning signs. The FBI admitted last week it failed to follow up on a January tip about the suspect in the Florida shooting, who had been expelled from the high school.

Bump stocks were used by Stephen Paddock, the Las Vegas shooter believed to be responsible for the greatest mass shooting in modern American history, to kill dozens and injure hundreds in October. The Department of Justice began reviewing the matter, and Mr. Trump’s announcement was the result of that review.

The event Tuesday was intended to recognize those who have earned the highest possible valor award for public safety. Last year, Mr. Trump granted the award to the agents who risked their lives to protect members of Congress in the June congressional baseball practice shooting.

The last time the president had appeared publicly in Washington was Friday, to commemorate the victims of the shooting in Parkland, Fla., that took 17 lives. On Friday night, he visited the hospital where some of those injured in the shooting are recovering, and spoke with local members of law enforcement who intervened.