ELON, NC (NEWS RELEASE) As the remnants of Hurricane Michael enter North Carolina and the state experiences its second major storm in a month, a new Elon University Poll explores how threats to coastal communities and potential environmental disasters are being viewed by N.C. voters and how they are approaching policy questions related to climate change.

The Elon Poll also sought to find out how people throughout the state were impacted by Hurricane Florence, what they did to prepare and what they might do differently next time.

More than eight out of 10 said that climate change is “very” or “somewhat” likely to negatively impact the coastal communities of the state within the next 50 years, a slight uptick from when the Elon Poll asked that question in April 2017. More than half of respondents (54 percent) said hurricanes are getting more severe, while 43 percent said they are staying the same.

North Carolinians were generally prepared for the high winds and heavy rains brought by Hurricane Florence to the state during mid-September, according to the survey. About three out of four registered voters in the state said the warnings leading up to the storm were on target and that when the next storm threatens, they will prepare the same way as they did for Hurricane Florence. 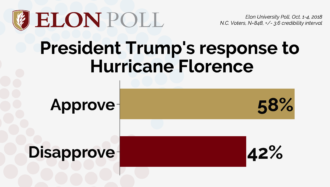 The most common impact on North Carolinians was power loss, with the survey finding that 42 percent statewide lost power for some period of time during the storm. One in three experienced wind or tree damage on their properties, and 17 percent experienced flooding at their home or workplace, while 14.5 percent were displaced from their homes during the storm for some length of time, the Elon Poll found. However, among those who experienced wind or water damage, about a quarter say they are not receiving the help they need to recover.

Bottled water was the most popular item North Carolinians stockpiled as they prepared for the hurricane, followed by flashlights, food, gasoline and cash, according to the survey results. 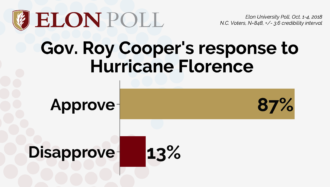 Local meteorologists and local news outlets were found to be the most trusted sources of information for making decisions related to natural disasters, earning higher marks than family members, national meteorologists, elected officials and friends.

For this survey, the Elon Poll used a blended sample that combined telephone voter list sample with an online opt-in sample. The survey was conducted from Oct. 1-4 and generated 848 responses — 500 online and 348 by telephone — with a credibility interval of +/- 3.6 percent. 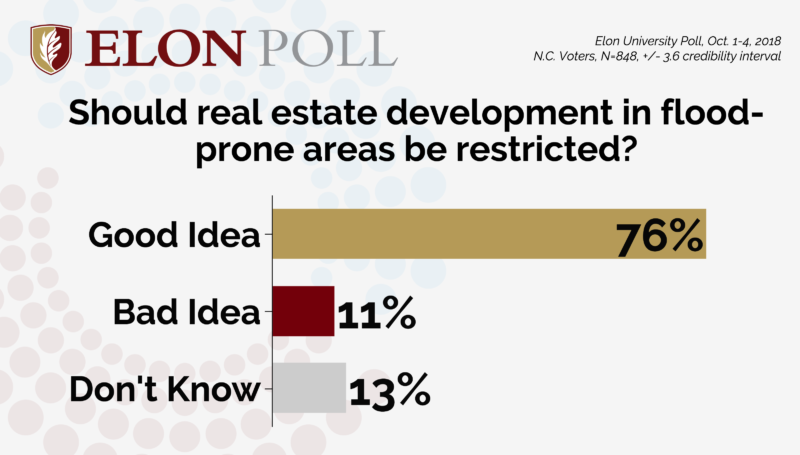 The impact of Hurricane Florence on North Carolina renewed discussion around a number of policy questions including development along the coast and in flood-prone areas, the steps that are taken to prevent environmental disasters from flooding and how to assist evacuees during disasters.

The Elon Poll found support for a number of policy initiatives, such as restricting real estate development in flood-prone areas, incorporating climate change findings into local government planning and ordinances and increasing environmental regulations for coal ash ponds and at hog farms.

A closer look at the responses found major divisions along party lines, particularly when it comes to climate change and environmental regulation. Overall, 62 percent felt that findings from climate change scientists should be incorporated into local government planning and ordinances, but support stood at 76 percent among Democrats and only 47 percent among Republicans.

Additionally, women were much more likely to say the severity of hurricanes are increasing. Fifty-nine percent held that view compared to 47 percent of men. 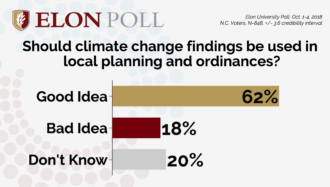 Respondents were also asked how likely they think it is that climate change will have a negative impact on N.C. coastal communities, a question asked by the Elon Poll conducted in April 2017.

Since then, opinions have shifted toward North Carolinians believing that such a negative impact on coastal communities from climate change is more likely. Overall, 52 percent believe it is “very likely” and 31 percent believe it is somewhat likely while 17 percent say that it is “not at all likely.”

“Measuring the extent and isolating the causes of changes in voter attitudes on issues like climate change is difficult for pollsters from a methodological perspective,” Husser said. “However, our results suggest that Hurricane Florence has led to a shift in some voters’ attitudes on climate change. This is in line with a number of academic studies finding that personal, local weather experiences are important in how people respond to what climate scientists describe as a global pattern.”

This question also showed splits along educational and gender lines, with those respondents with at least a bachelor’s degree and female respondents both more inclined to believe negative impacts from climate change were “very likely.”

Preparing for the next storm
Given North Carolina’s position along the East Coast and the frequency with which it is impacted by hurricanes, the Elon Poll sought to determine how experiences during Hurricane Florence might be impacting how North Carolinians might view the next storm to come their way.

With Hurricane Florence and its slow pace through the Atlantic Ocean, many were keeping a close eye on changes in the forecast, with the storm eventually taking a much more westerly route once making landfall. About one in four — 28 percent — said they would be more likely to believe weather reports when the next storm approaches while 7.5 percent said they would be less likely to believe those reports. About two in three —64 percent — said their experience during Hurricane Florence would have not impact on how much they believe weather reports.

“If North Carolinians prepare similarly before a future storm, most are likely to have water, food and flashlights,” Husser said. “However, emergency officials should note our results that many did not acquire extra gasoline and cash. I hope those officials will also consider that a small, yet substantively important, percentage of voters say their experiences with Florence made them less likely to believe weather reports the next time a storm is forecasted to hit their area. This creates a danger of ignored warnings next time.”

North Carolinians processed information about the hurricane and its potential impact from a variety of sources. Local meteorologists and local news ranked as the most trustworthy, with 31 percent of respondents saying that they are the most likely to trust those sources when making disaster decisions. Eighteen percent said they trusted no one but themselves while 17 percent said they trusted national meteorologists and national news. Family members came next, with 14 percent saying they were to be trusted most for advice when confronted with a disaster.