Littering is a crime, and now, it is possible to directly report those who litter to the North Carolina Department of Transportation. 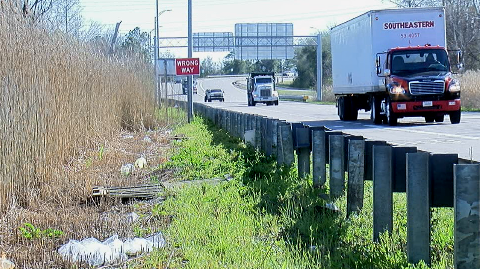 WILMINGTON, NC (WWAY) — Over time, locals have been noticing an increasing amount of litter around major highways. The North Carolina Department of Transportation takes this issue seriously and is arranging for several contractors to come this week to work in Pender, New Hanover, and parts of Brunswick county to reduce the existing trash. U.S 421 and U.S 74 are problem areas the contractors plan to focus on.

WWAY spoke to Daniel Jones, a division-three roadside environmental engineer, who expressed the importance on reducing roadside litter at the source.

“We need public engagement. We need accountability for the public. This is a preventable expense for the department.”

Even though there are volunteer programs in place such as Adopt a Highway and Sponsor a Highway, the amount of litter is overwhelming and does not seem to be slowing down. More information about the current programs can be found here.

Jones said that teaching children the consequences of littering, and holding “litterbugs” accountable are some ways to help reduce litter at the source. He added that because problem areas are popular transportation routes to the landfill, it is important that when hauling trash that the loads are firmly secured to prevent litter on the roadways.

Littering North Carolina roadways is illegal and can result in fines for those that commit the offense. Some litterbugs simply need to be informed and reminded that littering – whether deliberate or unintentional – can end with a personal commitment to stop.
The N.C Department of Transportation’s Swat-A-Litterbug Program encourages the public to report people who litter in an effort to help make North Carolina roadways cleaner. The program provides every individual an opportunity to be an active participant in reducing litter on North Carolina roadways.

The public can report those who litter by contacting NCDOT’s Litter Management Section by ​filling out an online report​ or by calling 1-800-331-5864.