Trump says building wall would be act of ‘love’

WASHINGTON (AP) – The Latest on President Donald Trump and the partial government shutdown (all times local):

President Donald Trump is arguing that building a southern border wall would be an act of “love.”

Trump, in an Oval Office address Tuesday night, made another pitch to fulfill his signature campaign promise of building a wall at the Mexican border.

He has previously claimed that the Vatican and former President Barack Obama built walls for security. There is not a wall around Obama’s Washington home.

The debate over funding for the barrier has been at the center of a partial federal government shutdown. Trump initially vowed that Mexico would pay for the border wall.

Schumer says Democrats and Republicans agree on the need to secure borders. But the New York Democrat says the “symbol of America should be the Statue of Liberty, not a 30-foot wall.”

Schumer noted that Trump had promised to have Mexico pay for the wall. But he says having failed, Trump is now “unable to convince Congress or the American people to foot the bill.” 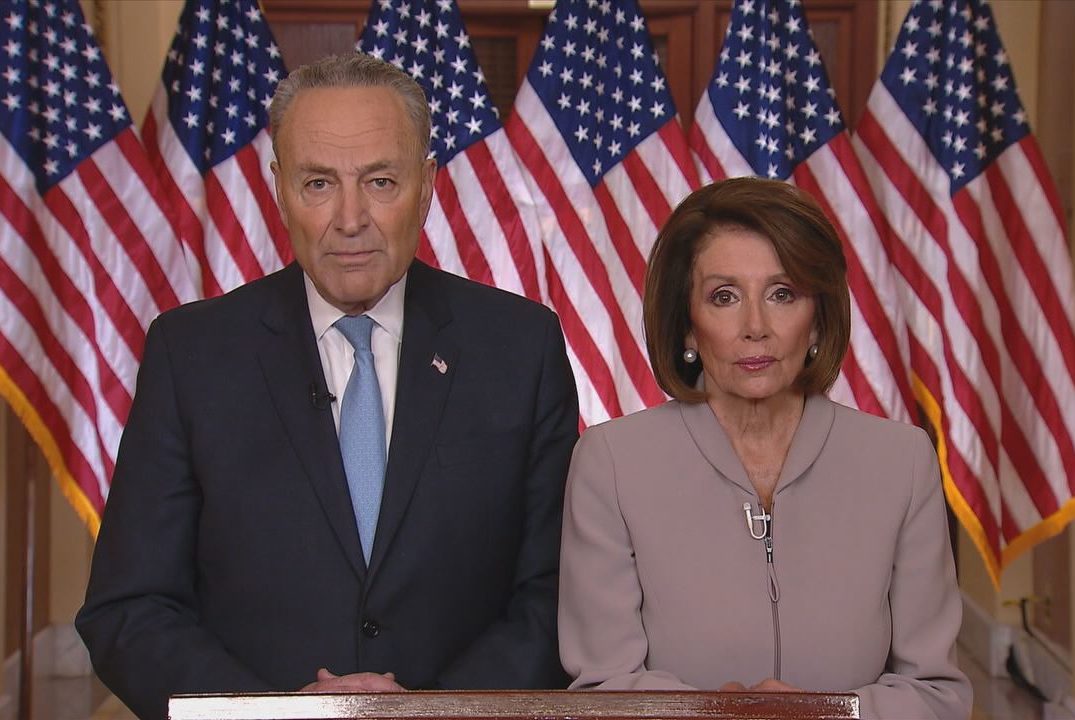 House Speaker Nancy Pelosi says the president has “chosen fear” in making the case to the American people for the border wall and Democrats “want to start with the facts.”

Pelosi said Tuesday night in a rebuttal to President Donald Trump’s Oval Office address that “we all agree that we need to secure our borders.”

She noted that the House passed legislation to reopen government on the first day of the new Congress. But Trump rejects that legislation because it doesn’t have funding for his border wall.

She says: “The fact is: President Trump must stop holding the American people hostage, must stop manufacturing a crisis, and must reopen the government.”

President Donald Trump is citing crimes committed by immigrants in the U.S. illegally to make his case for a southern border wall.

Studies over several years have found immigrants are less likely to commit crimes than people born in the United States.

But Trump said Tuesday night in an Oval Office address that he’s met with dozens of families whose loved ones were killed by immigrants in the country illegally. Trump says: “How much more American blood must we shed before Congress does its job?”

He is urging Americans to call members of Congress and tell them to finally secure the border. He says, “This is a choice between right and wrong, justice and injustice.”

Trump says he is determined to end the “cycle of human suffering.”

President Donald Trump says in an Oval Office address that there is a “growing humanitarian and security crisis” at the U.S.-Mexico border, though crossings have fallen in recent years.

The president said Tuesday night that all Americans are hurt by uncontrolled illegal immigration. He says it strains public resources and drives down jobs and wages.

The president says among those hit hardest by illegal immigration are African-Americans and Hispanics, though he did not provide any evidence to back that up.

The president is trying to convince Americans that the flow of immigrants into the U.S. illegally at the southern border is a crisis.

He asserts that the government remains shut down because Democrats won’t fund border security.

The White House says President Donald Trump and Vice President Mike Pence will meet with Republican senators at the Capitol on Wednesday as the partial government shutdown continues.

The meeting is taking place as Trump tries to generate public support for border wall money before ending the shutdown. He’ll address the nation from the Oval Office on Tuesday night, and has planned a trip to the U.S.-Mexico border two days later.

House Democrats have passed a plan to re-open the government without funding Trump’s promised border wall, but the Republican-led Senate has so far declined to take it up.

The vice president is increasingly being called upon to prevent GOP defections.

President Donald Trump hosted cable and broadcast television news representatives at an off-the-record lunch hours before he’s set to deliver a prime-time speech outlining what he sees as a “crisis” on the southern border.

White House counselor Kellyanne Conway says the group had a “robust exchange” and “questions were asked and answered.”

Baier said on air that attendees agreed to quote only one line from the president: “It was wonderful having lunch with you today.”

But he said that the White House believes the wall is a winning issue for Trump, whose refusal to sign a budget without billions for the border has forced a partial government shutdown.

The No. 2 House Democrat is blaming President Donald Trump for the partial government shutdown and says Trump is holding the government “hostage.”

Maryland Democrat Steny Hoyer says Tuesday that “in another context, we would call that an act of kidnapping or terrorism.”

Hoyer says it would be akin to an imposition of martial law if Trump declares a national emergency in order to unilaterally build a Southwest border wall. He says Trump doesn’t have that authority and doing that “certainly could” be an abuse of power.

Hoyer compares it to other governments “declaring martial law and justifying them in doing whatever they want to do.”

Democrats are refusing to give Trump $5.7 billion to build the wall. The impasse has led to a partial government shutdown, now in its third week.

House Speaker Nancy Pelosi and Senate Minority Leader Chuck Schumer will give the Democratic response to President Donald Trump’s remarks to the nation Tuesday on his proposed wall on the U.S.-Mexico border.

An impasse over wall funding has led to a partial government shutdown, now in its third week.

Pelosi and Schumer have flatly refused to pay for the wall. They said Tuesday they will deliver their response to Trump after his address at 9 p.m. EST.

Trump says there is a security crisis at the U.S.-Mexico border that can be addressed only by spending $5.7 billion on a wall as a way to prevent people from crossing into the U.S. illegally.

Trump said Friday that some previous presidents “have told me that we should have done it.”

The four living ex-presidents do not back Trump up on that claim. Jimmy Carter, Bill Clinton and George W. Bush said they had not discussed the wall with Trump. Barack Obama’s office reiterated his opposition to the wall.

Pence told NBC’s “Today” show on Tuesday, “I know the president has said that was his impression from previous presidents.”

Trump is scheduled to address the nation Tuesday night and lay out his case for the wall, which Democrats oppose. The government is in its third week of a partial shutdown over wall funding.

The message was made public Tuesday, the 18th day of the shutdown, as Trump prepared to make his case in a prime-time speech that there’s a U.S.-Mexico border crisis that must be addressed. Trump wants billions of dollars to fund a border wall, which congressional Democrats oppose.

The governors say federal workers are being hurt and state business is being affected by shutdowns of federal departments and agencies. They warn shorelines are at risk with reduced Coast Guard capabilities.

With no breakthrough in sight, President Donald Trump is set to argue in a prime-time address that a “crisis” at the U.S.-Mexico border requires the wall he’s demanding before ending the partial government shutdown.

Trump’s speech on Tuesday night will be followed by his visit Thursday to the southern border. White House press secretary Sarah Huckabee Sanders tweeted that he will use the visit to “meet with those on the front lines of the national security and humanitarian crisis.”

The administration is also at least talking about declaring a national emergency to allow Trump to move forward on the wall without Congress approving the $5.6 billion he wants.

In the meantime, hundreds of thousands of federal workers face missed paychecks Friday as the shutdown drags through a third week.

(Copyright 2019 The Associated Press. All rights reserved. This material may not be published, broadcast, rewritten or redistributed.)