Joe and Moe Stanley raised over $40,000 in a month to benefit Dolphin's hoops

BOLIVIA, N.C. (WWAY) – At halftime of the Dolphin’s matchup on January 5th, Joe and Moe Stanley were about to secretly steal the show. No one knew. They didn’t want anyone to know.

In the month of December, the two brothers from Shallotte had been calling friends and family from far and wide to try and raise funds for the college. Almost every person who they asked ended up donating. As the dollar donations grew, so did the anticipation.

The final tally remained a secret – and once revealed, proved to be the biggest assist of the game. In the 31 days of December, they raised over $40,000.

“The amount shocked us also,” said Moe Stanley. “We told somebody from the college foundation what to write, and it blew her away.”

“And the president was there, it blew him away too,” added Joe Stanley.

They go way back with Walter Shaw, the men’s team head coach. Of the inner circle, he was last to find out (even though he kept asking Joe and Moe what they raised throughout the process), and his reaction was visible. 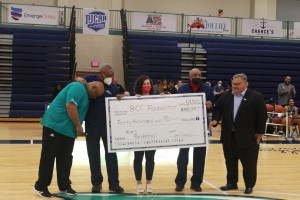 “Walt about fainted,” chuckled Joe. “This is the best kept secret in Brunswick County. This right here is first class, and they have a first class program here.”

It’s not the first time Joe and Moe have raised money for the college. It probably won’t be the last.

“When you give the best you got, it comes back to you.”

That seems to ring true with much of what Joe and Moe have dedicated their lives to.

Joe and Moe are 2 of 4 in their family. All kids in the family played basketball. Both brothers went to Southeastern CC in Whiteville, Joe went on to UNC Charlotte to get a degree in business administration and got a job in banking. Moe was an assistant principal for 13 years – 3 at the middle school and 10 at West Brunswick High School.

“We’ve been around,” said Moe. “It’s in our blood stream. We realize the value of helping other people. That’s something our father taught us. The fact of the matter is, when you help other people, you also help yourself. It was an absolutely fantastic feeling to realize that people really cared enough to give.”

With educations and ambitions like theirs, Joe and Moe could have easily chased money and aspirations, but their father instilled within them the value of community.

“Our dad believed back in the years, Black kids that graduated – due to lack of jobs – would always move north for better opportunities,” said Moe. “He said to us ‘You guys need to come home because we need people like you in our community.”

And they’ve stuck around, to the benefit of the whole county.

“We try to help young kids. It’s always been a passion for us,” said Joe. That’s not the only passion they share. “We’ve always been basketball junkies. We go to tournaments, take young guys to tournaments and stay all day watching basketball. It’s just what we love. We’ve always loved sports. We used to go down in the corn field and take the roads and level them off and put goals down and play basketball on Sunday afternoon with all our friends,” Joe reflected. “We got pretty competitive at it.”

It proves to show the power of community relations. The brothers called on people not even affiliated with Brunswick county. But because of who they are, even famous people still did not hesitate to help. One donation came from a former UNC Charlotte teammate of Joes who went on to play for the Boston Celtics.

“I got to know Cedric Maxwell personally,” said Joe. “I picked up the phone, and asked him if he wants to match what we got… He did send me a contribution. He remembered me from school You call on your resources. You never know who is going to end up in a position of financial wealth. You never know when you’re coaching a Michael Jordan.”

“Yeah, you never know when you’re coaching a Michael Jordan, but you are always coaching and always teaching a good citizen. Some people have different talents, but all people – you need to keep in mind you are helping people become better citizens.

Ultimately, that is why they do what they do – to show the next generation that they got help, they utilized it, and it put them in this position to give back. They say two factors attribute to giving back: being able, and being willing – with both money and time. Joe and Moe give both, and hope others can as well. Part of the reason they want to help Brunswick CC is to provide the athletes in the program a visual representation of serving their community.

“If you’re a person who has an excess heart, someone who cares about other people, I think if there is one thing we miss today is that we don’t have enough caring about each other. If we do truly care about each other. Reach out and help people. It doesn’t have to be this. look around, find something or somebody you can help,” says Moe.

“Time and time again, I’ve heard ‘Joe and Moe donated…’ No, Joe and Moe delivered the donation that the community gave us. And we want to say thank you from the bottom of our heart.”