CHARLOTTE, N.C. (AP) — Facing a growing investigation that accuses him of sexual misconduct and using racist language at work, Carolina Panthers owner Jerry Richardson announced Sunday that he will sell the NFL team after the season.

The team announced on Twitter that Richardson is selling the team, linking to a five-paragraph letter by the franchise’s only owner.

“I believe it is time to turn the franchise over to new ownership,” Richardson wrote, saying he wouldn’t begin discussions until after the season. The Panthers, who lost in the Super Bowl in 2016, are in playoff position again.

“I hope everyone in the organization, both on and off the field, will be firmly focused on one mission: to play and win the Super Bowl,” said Richardson, 81.

The NFL awarded Richardson, a former player with the Baltimore Colts, an expansion franchise in 1993, and he has been the team’s only owner.

Richardson’s letter did not directly address the investigation. 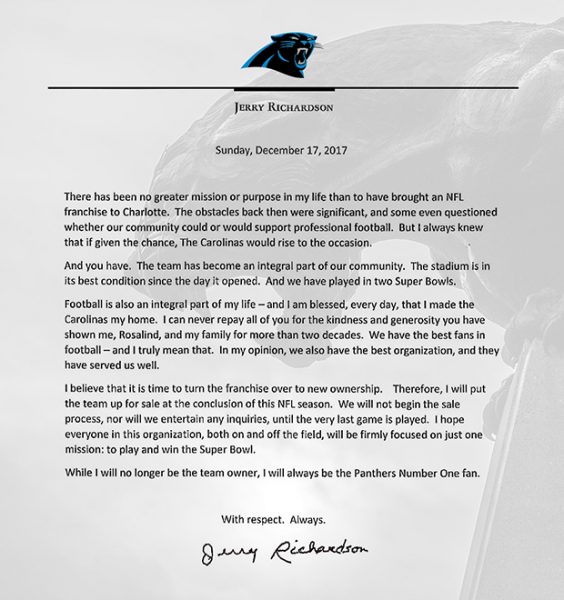 The statement Panthers owner Jerry Richardon issued on Dec. 17, 2017, about his decision to sell the team. (Source: Carolina Panthers)

“There has been no greater mission or purpose in my life than to have brought and NFL franchise to Charlotte,” Richardson wrote. “The obstacles back then were significant and some even questioned whether or community could or would support professional football. But I always knew that if given the chance the Carolina would rise to the occasion. And you have. The team has become an integral part of the community. The stadium is in its best condition since the day it opened.”

Richardson attended the game Sunday’s game against the Green Bay Packers at Bank of America Stadium and was photographed sitting beside his wife Rosalind in his luxury box.

He did not speak to reporters.

“While I will no longer be the team owner, I will always be the Panthers Number One fan,” Richardson’s letter said.

The Panthers are tied to Charlotte through June of 2019.

The city of Charlotte and the Panthers reached agreement on improvements for the team’s stadium in 2013. The plan called for the city to contribute about $87 million for renovations to Bank of America Stadium in exchange for a six-year deal to keep the Panthers in Charlotte.

The money is less than what the team was seeking for improvements of the stadium, which opened in 1996. Forbes estimates the Panthers worth at $2.3 billion.

Richardson’s announcement comes after a Sports Illustrated report that cited unnamed sources who said Richardson made sexually suggestive comments to women and on at least one occasion directed a racial slur at an African-American Panthers scout. The report states that the settlements came with non-disclosure requirements forbidding the parties from discussing the details.

The NFL on Sunday said it has taken over the investigation of allegations of workplace misconduct. NFL spokesman Brian McCarthy said the league had no comment on the report.