Mark Harris beat incumbent Robert Pittenger in May’s GOP primary by about 1400 votes.
This fall Harris beat Democrat Dan McCready by about 900 votes for the district that stretches from the Charlotte area to Bladen County.

It’s what may have happened in Bladen County with a man named McCrae Dowless and others that has the state board of elections looking for answers.

The board of elections voted unanimously to delay certifying the election last week due to complaints of possible tampering in the election in relation to mail-in applicatios for absentee ballots.

Dowless currently serves as an elected official on Bladen County’s Soil and Water Conservation Disrtict board. This year, Dowless campaigned on behalf of Republican Mark Harris who won the county handily.

Emma Lee Shipman filed one of the complaints to the state board of elections. She tells our affiliate WTVD that her ballot was almost rejected because a woman came to her home and took it, but brought it back.

“She said I brought your voting papers back and she says here’s a stamp, I want you to mail in,” you can hear more from Shipman here.

WWAY also obtained new information from the state in their investigation.

These “irregularities” led the state to not only bring into question the outcomes of the Congressional race, but to pause the certification of two county races.

WWAY’s Andrew James received state documents that show at least thirty mail in ballots were turned away in Bladen County. According to the documents released in the investigaiton, it appears the state board did not recieve return applications from more than 480 voters after the state sent letters to inform those voters that their ballot applications were incorrectly post-marked and were not counted. 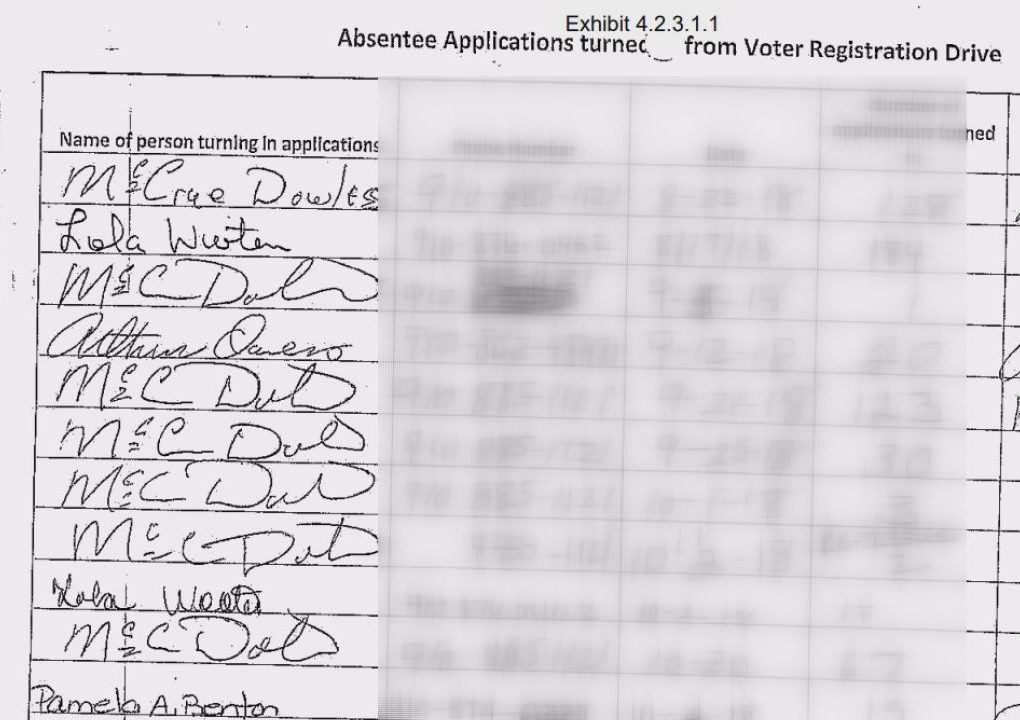 The state also released a list of names that were documented when a grouping of mail-in absentee ballot applications were turned in. Out of the four pages provided, McCrae Dowless signed in more than a dozen times accounting for nearly 600 mail-in ballot applications.

However, there are an unknown amount of people whose names are not on this list provdied by the state that alleged to have been influenced by Dowless. Cheryl Kinlaw spoke to our affiliate WSOC, she says Dowless paid her.

“We’d thought, we had seen him do it for years,” said Kinlaw to WSOC’s Joe Bruno. “So we assumed it was perfectly okay to go pick up the ballots. And we assumed that he was just turning them all in like it was supposed to be done.”

A SBI spokesperson would not comment Tuesday on the 2016 investigations. The Wake County DA’s office has not returned our calls. We have tried multiple times to reach Dowless but he has not called back.

We also have been unable to reach the Bladen County Republican and Democratic party chairs.

We did hear from Bladen County Elections Director Cynthia Shaw. Shaw is leaving office this month. She is set to retire at the beginning of next year. We asked if the investigation influenced her early departure for vacation.

“The investigation has nothing to do with me leaving,” said Shaw to our Andrew James. “I am retiring, not resigning.”

The long-time elections director actually announced her retirement back in August.