Parents call for Plan A in New Hanover County schools, Board of Education delays decision

NEW HANOVER COUNTY, NC (WWAY) — The Board of Education made no changes to school plans during its regular meeting on Tuesday, leaving many parents frustrated and some teachers breathing a sigh of relief.

“The data shows the kids need to be back,” said parent Susan McLean.

McLean teaches a pod of 12 middle school students whose parents are essential workers.

“Every single day I get up at 4:30 in the morning and I download all of the information and I teach it to them because they can’t grasp the concepts on Zoom,” she said. “I challenge any member of the board of education to come sit with me and teach those kids.”

The governor has allowed elementary schools in North Carolina to reopen under Plan A, but New Hanover County remains under Plan B for all schools. Parents and students both say they feel the current hybrid of in-person and virtual learning is ineffective.

“My grandson wants so desperately to be able to do well in school and it breaks my heart to see him cry, to get angry, to get angry at teachers when this isn’t who he is,” said Liz Garnell. “He is a student that wants to please and wants to do well.”

“I can speak on behalf of many parents who have reached out to me and said ‘my child is now clinically depressed,” said parent Sara Klemo. “I would like to know what the school board’s plan is to remediate their clinical illness.”

On the other side of the issue, teachers have concerns about returning to school buildings full time without being vaccinated. Amanda White, president of the New Hanover County Association of Educators, says she’s disappointed by Gov. Roy Cooper’s new push for in-person instruction.

“15 educators have died since we’ve reopened schools,” White said. “And the fact that 25 states have been vaccinating their school staff and we are not one of those 25 states tells us that he does not value those that are having to be in the school building every day.”

Teachers currently fall under vaccination group 3, which according to the county board of health could could be a month or more away depending on vaccine supply .

“Once all teachers are able to have that second dose, it’s going to be a different ballgame,” White said.

At the meeting, Board of Education Chair Stefanie Adams read a letter sent to the board by New Hanover County Commission Chair Julia Olson-Boseman. In the letter, Olson-Boseman expressed a desire to prioritize teachers for vaccinations.

“I plan to advocate to the state that teachers, particularly those in K-5 schools, who are willing to return to in-person instruction receive priority for vaccines in the state’s plan. While I share the governor’s call for in-person learning, I believe that prioritization should be reflected in prioritization of the limited supply of vaccines. I have already expressed this stance to our Public Health Department as well, so that they can begin planning in order to prioritize teachers and school staff at the earliest possible time,” Olson-Boseman wrote in the letter. 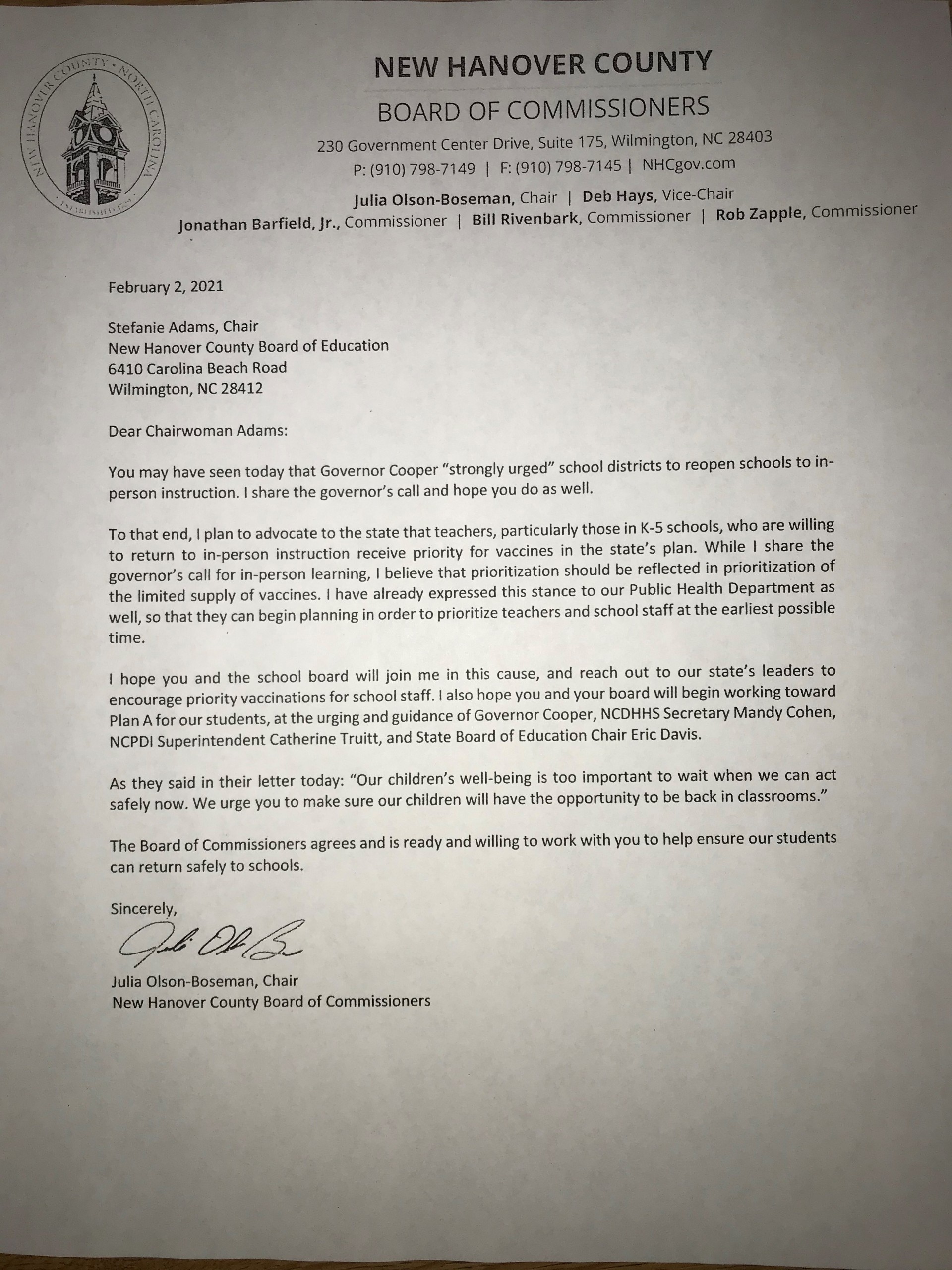 After hearing comments during the meeting from those on both sides of the issue, the board opted to hold a special meeting next week to discuss Plan A. Board vice-chair Nelson Beaulieu expects that meeting to happen Tuesday. Following the meeting, he explained the choice to hold a separate meeting rather than make a decision on the spot.

“We want to make sure we get this decision right,” Beaulieu said following the meeting. It wasn’t on our agenda and I don’t think anybody wants to take a vote that they’re not ready for. So I think we want to gather as much information as possible, move as expeditiously as possible, but really get our decisions right. ”

An exact time for that meeting has not been announced.

Beaulieu was the only board member that voted against delaying Plan A for elementary schools at a special meeting on January 13. Pete Wildeboer was the only member of the Board of Education who arrived early before Tuesday’s meeting and spoke with the families protesting.

Superintendent Dr. Charles Foust says if the board were to vote to move forward with Plan A for elementary schools, those schools would be ready to make the transition within one week.