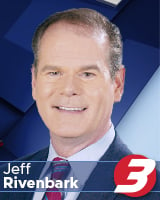 Jeff Rivenbark joined WWAY in March 2018. He currently co-anchors WWAY News at 6 pm with Hannah Patrick and solo anchors the 7 pm, 10 pm and 11 pm newscasts. Before coming to the evenings to work, Jeff served as a co-anchor of Good Morning Carolina for more than four years.

During his tenure at WWAY, he has interviewed several newsmakers including Governor Roy Cooper and Congressman David Rouzer, and he has covered hurricanes Florence (2018), Dorian (2019) and Isaias (2020). He has also featured dozens of educators for the station’s “Teacher of the Week” franchise. Jeff has worked on special reports evaluating the opioid crisis in the Cape Fear and the controversy over Confederate statues on public grounds. He has won numerous awards from the Radio Television Digital News Association of the Carolinas.

In his free time, Jeff is an adjunct professor with the Communication Studies Department at UNC Wilmington where he teaches Multimedia Journalism. He enjoys spending time with his Lab-mix rescue, Daisy, and long walks on the beach. Jeff is currently a board member with Teen Scene, a non-profit organization that produces a monthly literary publication written by and for teenagers. Previously, he has served as a board member with Thalian Association Community Theatre.

Jeff earned a B.A. in Communication Studies from UNC Wilmington in 1993 and a M.A. Journalism from Regent University in 1996. He is originally from Burgaw, NC. You can follow Jeff on Facebook, Linkedin and Twitter. Feel free to email him at jrivenbark@wwaytv3.com.

Student in custody for bringing revolver to high school in Onslow Co.

9/11 Observances in the Cape Fear

Battleship repairs on pace for completion by mid-August

UPDATE: One treated for smoke inhalation during boat fire at Oak Island marina

Cape Fear Hooley Under the Bridge to feature bands, Irish dancers and leprechauns